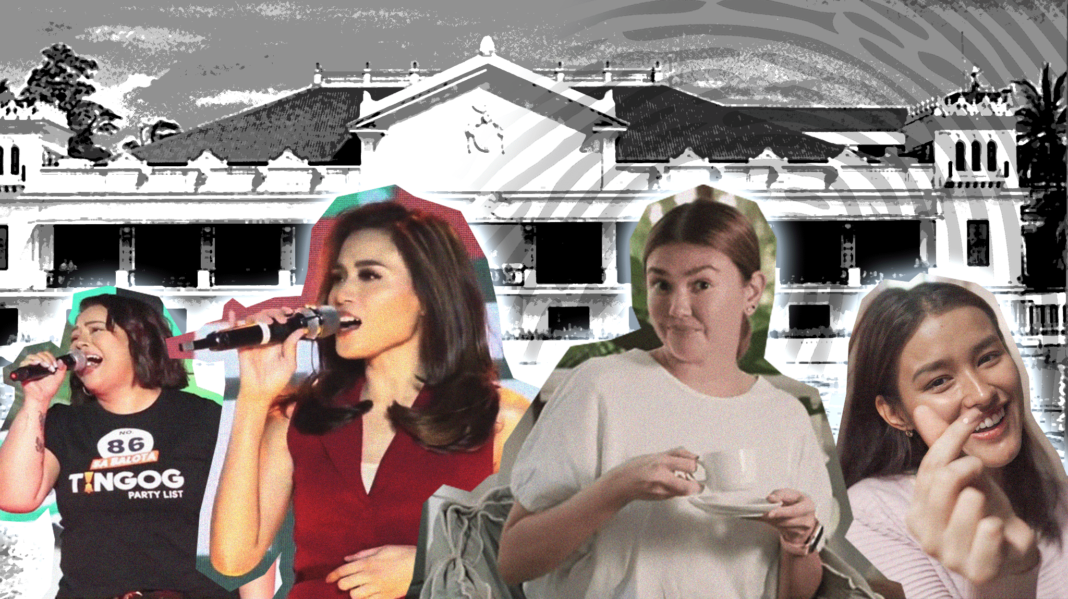 The relations between celebrity culture and modern politics are characterized by the worst excrescences of corporatism—conformity and passivity through entertainment, branding and image control through television and social media.

These two domains with a pretense of novelty and utility have become interchangeable in their pursuit of self-interested positions and their purport to offer amusement.

The impetus of social media, the omega of narcissism, has cropped celebrities (here I include influencers) and politicians identical in their aim for notoriety; notwithstanding their professed service to the public whether through entertainment, which is a euphemism for waste-of-time, or practical self-advertisement through well-publicized humanitarian deeds—both confess to appeal to the modern, technologically savvy, cult of personality.

The coming elections have proved these attributes prominent in politicians and in celebrities running for office. Just take the recent interview of presidential candidates by a well-known TV host. The interview went ahead like a gossip talk show; the interviewees behaved like professional actors who have memorized their lines explaining themselves of rumors and accusations; some went so far as to exhibit their hearts when discussing the deplorable poverty in the country: tears always add to the effect.

This is the mass media’s approach to topical subjects—something in the order of an episode of a nightly teleserye. More entertaining than informative. The questions were narrowed down to the uncontroversial making no allowance for the most pressing and divisive issues in the country.

Issues like the life and death question of agrarian reform, the oppression and killings of indigenous peoples like the Lumads and the militarization of their ancestral lands, the repression and murders of journalists, the illegality of the war on drugs and the prosecution of those responsible, environmental degradation due to interventions of multinational corporations, the sordid state of education and health systems, the call for a decent minimum wage, etc. These are some of the topics that affect people’s lives daily that the mass media is so happy to ignore in order to sustain advertising ratings and revenue and to not offend the privileged parties.

Also noteworthy is the mass media’s discriminatory and unfair practice of excluding candidates not deemed as newsworthy like the case of labor organizer and presidential candidate Ka Leody De Guzman and his colleague, one of the most important Filipino intellectuals today, Walden Bello for the vice presidency. It should be noted that Ka Leody and Bello are independent candidates not sponsored by wealthy businessmen which is the case of the five leading presidential candidates. Although Ka Leody and Bello are most qualified, possessed with legitimate political grassroots credentials they are shunned by the mass media for their criticisms of oligarchy and corporate activities thus turning them into pariahs.

Part of the circus cynicism of Philippine politics is the meddling of celebrities in politics. The nauseating presence of celebrities in our daily lives through television and social media has consolidated their participation in public service—if politics were so. The practice of constantly updating their lives through social media has given celebrities the upper hand when it comes to gathering attention as opposed to the traditional politicking of politicians. Video content stokes its own fantasy of political agenda. From the most banal to the vulgar anything can be transformed into “content” and the more “likes” the bigger the self-confidence the stronger the drive to politics, to power.

Modern politics has become a free theatre show where anyone is invited and anyone can be an actor and a spectator depending on one’s taste. A world-class boxer or a comedian who has little or no experience of local politics or law and the constitution wakes up one morning and is a senator. Who allowed this political devolution? The unflagging hegemony of televisual presence and the complicity of the mass media: publicity always trumps credibility.

Some celebrities who run for office have good intentions. But no amount of good intentions can overtake the greater importance of experience—long, laborious, community-driven, locally grounded political experience. Good intentions without daring intelligence, without adequate willpower and a foundational experience end up as delusions: the purest strain of narcissism. There are those who run for office for sheer adventurism, who take politics as a pursuit of individual fortune, for the effortless monetary returns. In this coming election, there are many scoundrels.

One can distinguish them by their style of campaigning. Sentimentalism. That sour and manipulative attribute of celebrity politicians, particularly those who from the misery of poverty rose to the political ladder. They appoint themselves as the rightful representatives of the poor by virtue of their life experience. They are prone to crying and using emotionally inflected words during interviews: tears being proof of their authenticity. But the experience of poverty is not a guarantee of a capable leader. In fact, many examples in the world history of leaders whose humble background did not prevent them from abusing their power and authority—Mussolini, Himmler, Mugabe, and the list goes on.

Neither are we to trust candidates who are representatives of their class—those from oligarchic families. History continues to inform us that their ominous presence is an attempt to invent phony credibility and maintain a hold on power and protect their privileges. Oligarchic families are rapacious, arrogant, corrupt, bellicose, and hypocritical. They are the symbol of everything that is backward, dysfunctional, and undemocratic in our political culture. They are the grim residue of obsolete colonialism masquerading as modern, hip, and chic.

This coming election we the voters have the responsibility to make the right choice. But making the right choice requires work. Those who have the privilege and time to research and inspect and find the truth about the candidates have a greater responsibility of encouraging a community discourse, of discussing the stakes in this election. Let us not be fooled by the populous language which is the fashion nowadays amongst politicians: a language that grew out of the current regime who sees the world in over-simplified terms, in shades of black and white (e.g. a poor is a drug addict, if you’re not a DDS then you’re a yellow party supporter).

We should encourage each other of the importance of civilized talk, that more than ever intelligence, critical spirit, and compassion are the necessary components for a decent society. And always be wary of those who sell themselves as the savior, the kind of “leader” we are looking for. It takes a little reading of history to acknowledge that most politicians are astonishingly mediocre intellectually and morally, as remarked by the Austrian born British philosopher Karl Popper:

“I am inclined to think that rulers have rarely been above the average, either morally and intellectually, and often below it. And I think that it is reasonable to adopt, in politics, the principle of preparing for the worst, as well as we can, though we should, of course, at the same time try to obtain the best. It appears to me madness to base all our political efforts upon the faint hope that we shall be successful in obtaining excellent, or even competent, rulers.”

Change doesn’t come from one leader, it comes from solidarity, from organizing the community below.

Carlo Rey Lacsamana is a Filipino born and raised in Manila, Philippines. Since 2005, he has been living and working in the Tuscan town of Lucca, Italy. He regularly contributes to journals in the Philippines, writing about politics, culture, and art. He also writes for a local academic magazine in Tuscany that is published twice a year. His articles have been published in magazines in the U.S., Canada, U.K., Germany, India, and Mexico. Visit his website or follow him on Instagram @carlo_rey_lacsamana.