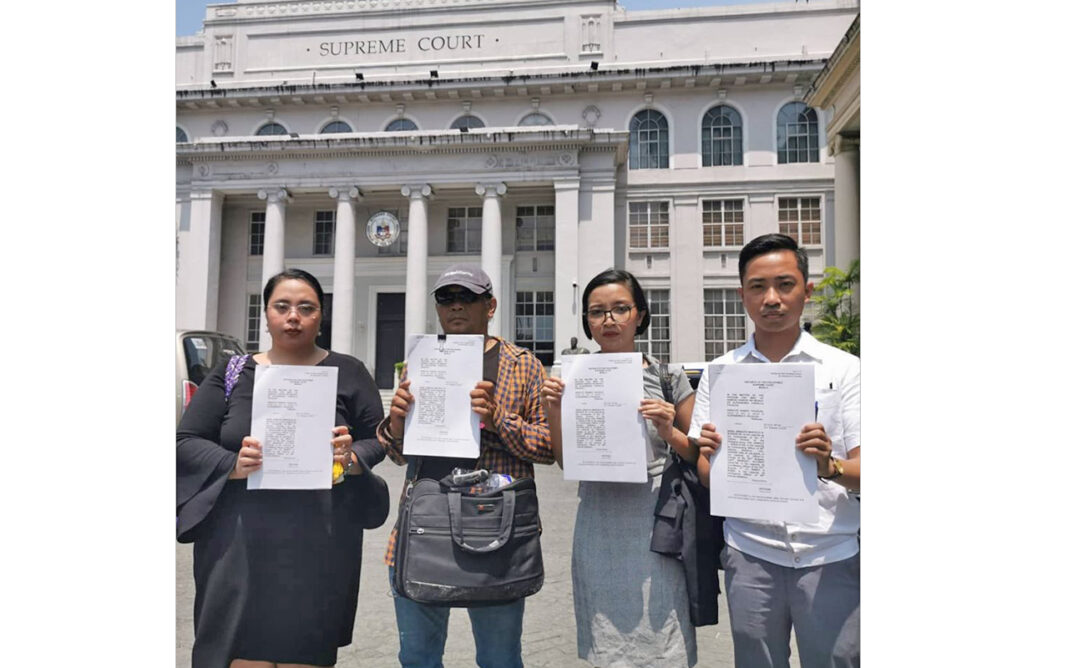 “After maliciously releasing a so-called signed certification and affidavit of surrender by Alexandrea Pacalda, the Philippine Army and police were humiliated when the victim publicly recanted and revealed how she was coerced,” said Karapatan legal counsel Atty. Ma. Sol Taule.

The Pacalda family, assisted by Taule, filed a habeas corpus petition at the Supreme Court on September 23, 2019. The petition came with a prayer to the court to oblige the military to release Pacalda to her family.

The group said Pacalda’s father Arnulfo was assisted by the Commission on Human Rights (CHR) to assert her release last September 19, 2019, but Alexandrea was not released.

Pacalda remains in military custody for nine days without charges.

“She was threatened with trumped-up charges of illegal possession of firearms and explosives last Saturday, September 21, as reprisal for her speaking out that she is being held under custody without charges and that she was coerced to sign and present herself as a surrenderee,” the group said.

Pacalda was brought to a fiscal on Saturday, after six days of detention. Taule said this is a clear reprisal for the video Pacalda released denying the military reports on her ‘voluntary surrender.’

The rule came from a Department of Justice Department Circular No. 50 in 2012 to protect the arrested person against “undue deprivation of liberty” as mandated by the Philippine Constitution in Article III, Section 1.

Pacalda being continuously held in the military camp now falls under illegal arrest and arbitrary detention, the group explained. The prosecutor has yet to accept the cases filed on Saturday and is not yet valid.

The habeas corpus petition identified five respondents – all of whom are active military ranking officers who were involved in the abduction, illegal detention and coercion of Pacalda.

“The military and the police wanted to make Alexandrea the poster girl for voluntary surrenderees. They wanted to recruit the Pacalda family to the organization of parents who now demonize activism. From the time of Alexandrea’s arrest up until now, the military and the police all have denied Alexandrea her voice. It was through the efforts of her family that she was able to reveal the truth. Even now as they are accusing her of being a rebel, they refuse to let Alexandrea speak. Why? Because they know the 23-year-old girl can readily confront and disprove their lies,” said Taule.

Karapatan said Pacalda’s case is ‘indicative of how other cases of “voluntary surrenders” came to be.’

Taule also said the articles from the Philippine News Agency (PNA) and the many troll accounts by state forces were likewise put to shame by an unyielding activist in Pacalda.

PNA is the government newswire.

“There is no abduction here. We understand that she has been fed with stories of torture if she goes to the military or the police that is why we immediately sought for her immediate relatives upon learning of her surrender because we want her to feel safe,” Gasalatan was quoted in the PNA article.

Regarding this, Karapatan clarified that ‘Alexandrea Pacalda signed the affidavit of voluntary surrender while under duress. In a signed statement to her lawyer, the victim said that she was subjected to mental torture, and was merely coerced to sign the affidavit. She added that she was not allowed to sleep and was starved for 24-30 hours.’

The PNA, also regularly reporting on the anti-activist group “Hands Off Our Children,” also included in its article the account from the group of Pacalda’s surrender and a ‘family reunion’ photo.

“Simple lang ang hangarin ng #HandsOffOurChildren, ang mabuo ang pamilyang Pilipino. Kinakalat nila na si Alexa ay isang ‘human rights advocate’ na kinuha ng military (The objective of #HandsOffOurChildren is simple and that is to unite the Filipino family. They (leftist groups) spread that Alexa was a ‘human rights advocate’ and that she was abducted by the military),” said the group as quoted in the article.

Regarding this, Karapatan relayed that ‘The father of Alexandrea was presented to the media. He initially stated that his daughter was a good person and that he was the one who convinced his daughter to sign the papers. The father was coerced to change his account because the military merely wanted the father to talk about the so-called “surrender” of Alexandrea. The family was also invited to join the parade of parents who claim their children are missing, despite being defied and opposed by the children themselves. The Pacalda family refused…”

Another PNA article posted on September 18 detailed accounts of Pacalda’s father of her ‘voluntary surrender.’

Karapatan, on one hand, relayed on the father or family’s involvement in Pacalda’s surrender that ‘Alexandrea’s father broke down after meeting with Karapatan’s legal counsel. He said he signed the affidavit and convinced her daughter to do so, as they were held in a hostile environment. They were fearful of what the military can do to Alexandrea, given that she remains under military custody.’

In another PNA article on September 20, Capt. Benedick Alfonso G. Cagatin, civil-military operations officer of 201st IB clarified that Pacalda was not detained nor charged with any crime as she gave herself up voluntarily.

The article also contained a photo of Pacalda a New People’s Army in a weapons training, shared by the military’s 201st Infantry Brigade to the PNA. The military’s source of the photo was not identified.

To this, the Pacalda family denied that she was the one in the pictures and videos circulating online.

“We stand by the statement of the victim and her family. According to our sources, she is currently affiliated with a peasant organization in Quezon. Between the AFP who are experts in manipulation, deception, and coercion, and a 23-year-old woman who was courageous enough to reveal the truth of her ordeal, we will consciously side with the latter. This is definitely not the first time that the fake news machine of state forces have used alleged pictures and videos to implicate innocents,” said Taule, Pacalda’s legal counsel.

Youth activists who joined the picket at the Supreme Court at the time of the filing of the habeas corpus petition also assailed the PNA’s position as ‘official troll and fake news machine’ as the media agency is government-funded.

They assailed that the PNA has yet to report on the current turn of events on the three articles they posted on Pacalda’s arrest and important events they willingly disregarded, such as Pacalda’s own statement that she was forced to surrender, Pacalda’s own video message refuting the military report and denying that she surrendered, the nine days detention without charges, the refusal to release Pacalda to her parents and the CHR after five days of detention without charges, the charges filed against Pacalda past the warrantless detention period, and now, the habeas corpus petition.

Amid all stories coming out of Pacalda’s case, Karapatan and other groups insisted that Pacalda must, first of all, be released.

“We demand Alexandrea’s immediate release to her parents. We remind the nation that the military itself is committing crimes and irregularities, then burying it by deploying their band of fake news machinery. The fact remains: Alexandrea was abducted, she was mentally tortured, she was coerced to sign documents, she was illegally detained, and now she is set to face trumped-up charges for facing the truth. This is the kind of state forces we have – willing to undertake the illegal to get what they want. They have reached an all-time low and they are put to shame by the determination of Alexandrea,” Taule said.