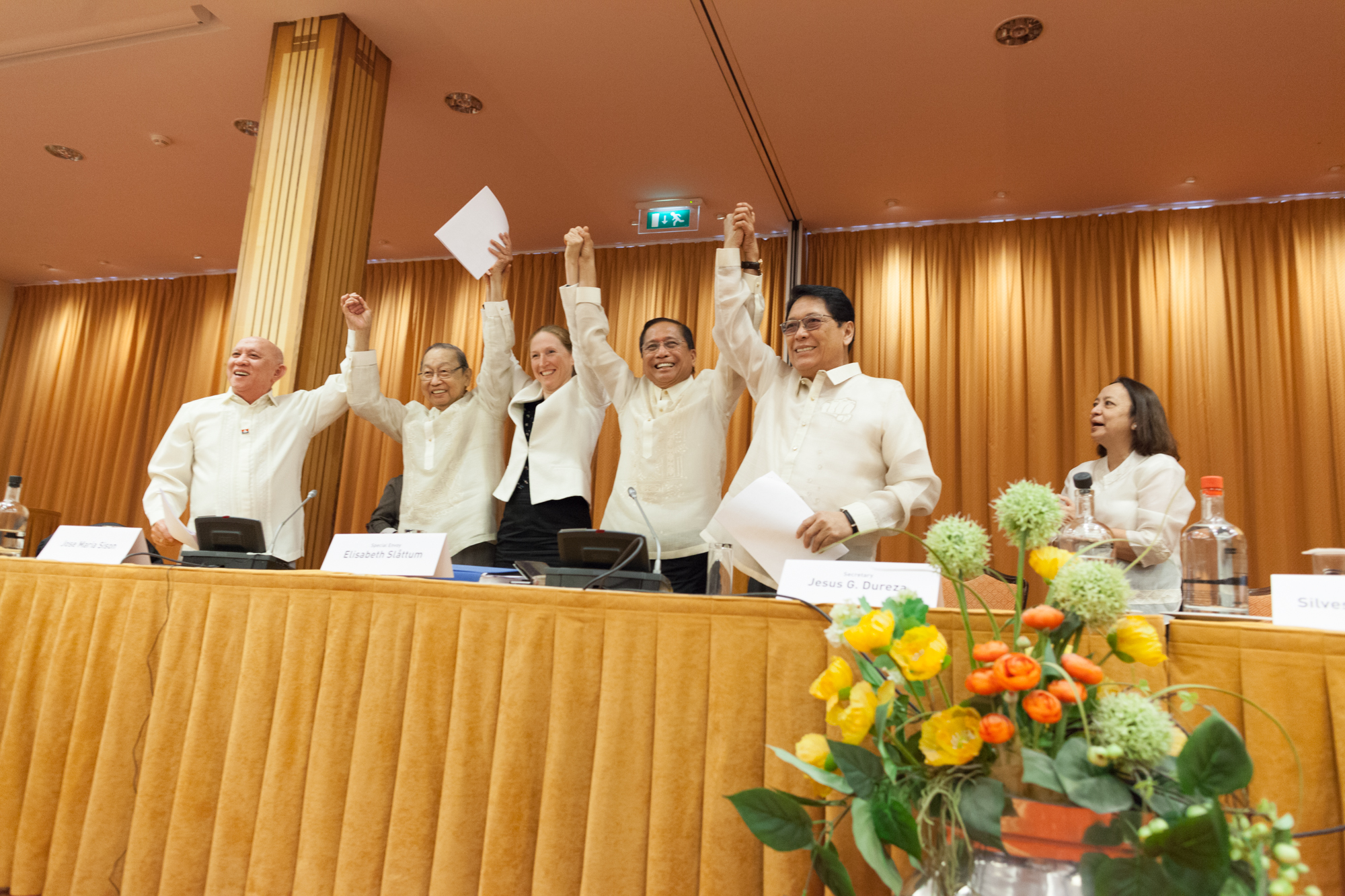 In the latest Pulse Asia Ulat ng Bayan survey, 74% among 1200 respondents from the National Capital Region, Balanced Luzon, Visayas and Mindanao said they are aware of the peace talks. Among those aware, 85% support the peace talks between the Government of the Republic of the Philippines (GRP) and the National Democratic Front of the Philippines (NDFP).

The survey was conducted from March 15 to 20, 2017, the start of which was four days after the GRP and the NDFP finished successful informal talks and published the Utrecht Joint Statement, declaring affirmation of previously signed agreements and the continuation of the peace talks.

Based on results, 64% believe that the Department of Social Welfare and Development (DSWD) should have a role in supporting the Filipino people’s aspirations for peace.

“That many of our people  are aware and support the peace efforts of the government is a welcome development. Having peace in our land makes the DSWD’s delivery of services easier and faster. It also creates the condition where more of government’s resources and budget can be allocated for social services for the poor and marginalized sections of Philippine society,” Social Welfare Secretary Judy Taguiwalo said.

Talks to address poverty in the land

Breakdown of survey results reveal respondents who are aware believe that peace talks can help address poverty and the lack of services and underdevelopment that cause it:

Only 2% from both all respondents and aware respondents say that the peace talks will not help in developing the country in anyway.

Survey also showed that 78% of respondents who are aware of the peace talks say that it could end the clashes between the military and armed groups.

The numbers per area in favor of continuing the peace talks are as follows:  86% of NCR respondents; 76% in Balanced Luzon; 79% in Visayas; and 84% in Mindanao.

Most active phase of peace talks

The most active phase of the peace talks happened in the term of President Rodrigo Duterte, holding four formal talks and two informal talks in 11 months.

Peace forums were held all over the country, gathering support for the current substantive agenda of the peace talks: the social and economic reforms. This agenda is considered the heart of the peace negotiations as it addresses the roots of the armed conflict, and also would address the current problems of the Filipino people. In this agenda, the two parties are set to tackle land reform, rural development, national industrialization, environment protection and rights of workers.

But the talks hit a snag in February after a New People’s Army (NPA) announcement of their intention to lift their unilateral ceasefire declaration set off Duterte in daily angry pronouncements and actions against the revolutionary movement. The NPA expressed months prior the ceasefire lifting that the GRP’s Armed Forces of the Philippines violations of their own unilateral ceasefire had made the ceasefire untenable, the latest violations then included killings of farmers and Lumad even when the third round of talks were ongoing in Rome in January. Duterte then proceeded to order the withdrawal of the GRP from the peace talks, suspension of Joint Agreement on Safety and Immunity Guarantees, arrest of NDFP peace consultants, and declaration of CPP as terrorist organization.

Tension thawed, however, as informal talks were decided in February and held in Utrecht, the Netherlands in March. The two parties agreed to continue the fourth round of the talks as scheduled.

The fourth round of the peace talks was held from April 3 to 6 in Noordiwjk aan Zee, The Netherlands where the two parties agreed on the release of political prisoners, look into ceasefire and human rights violations, firmed up agreement on free land distribution as part of social and economic reforms agenda and agree on formulating a bilateral ceasefire agreement.

Also part of the fourth round talks agreements, the fifth round of the talks was scheduled on May 27 to June 2, 2016.