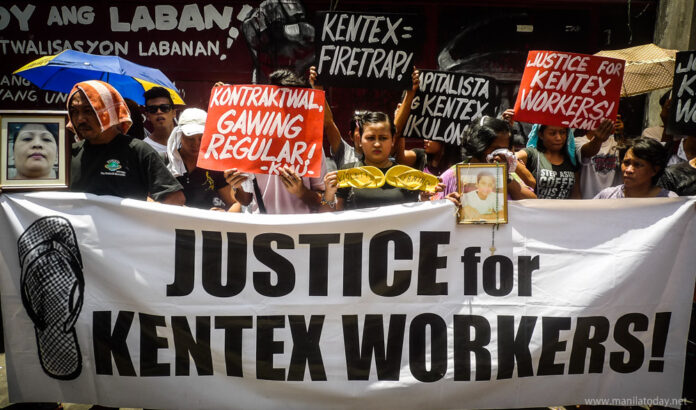 In the Catholic tradition, ceremonies are held in memory of the departed 40 days after death.

Bishop Pabillo officiated the mass, which was attended by survivors and kin oft he victims.Labor advocates and other supporters were also in attendance.

Fire gutted the slipper factory of Kentex Manufacturing Corporation last May 13, claiming the lives of no less than 72 people. The tragedy is considered one of the worst workplace disasters in Philippine history.

“The owners of the factories should give what is just for the families. They died during performing their duties as workers, as providers for their families,” said Bishop Pabillo.

After the liturgical service, the families and victims marched towards the burned Kentex factory to offer prayers. Slogans calling for justice were chanted while en route to the site.

“We want to talk face to face with Mr. Beato Ang, the owner of Kentex, so that he would know how we truly feel,” said Charlyn Yumido. Her mother, 39-year old Violeta Yumido, was among those who perished in the fire.

“More than a month has passed since the tragedy and we haven’t seen any sign of  Mr. Ang,” said Yumido.

Mr. Ang’s daughter, Barbara, and their legal counsel Atty. Renato Paraiso spoke with the victims last May 22. Ang reassured the victims’ kin that they will not hide from their responsibility and further added that it was their “moral obligation and social responsibility to do the right thing.”

But Bishop Pabillo criticized the lack of transparency with regards the status of the case.

“This silence only means that there might be something suspicious going on. A month has passed and justice remains to be seen,” he said.

The bishop maintained that the owners should be held accountable for violating multiple safety and health standards.

With the support of labor rights advocates, the victims’ families and survivors formed Justice for Kentex Workers Alliance last May 31.

“The Department of Labor should be held accountable because they issued a certificate of compliance despite the fact that Kentex did not pass health and safety standards, ” said Justice for Kentex Workers Alliance spokesperson Danny Atacador.

A letter of complaint was filed against government officials at the office of the Ombudsman on June 9.  Department of Labor and Employment Secretary Rosalinda Baldoz , Department of Interior and Local Government (DILG) Secretary Mar Roxas and DOLE-National Capital Region (NCR) Regional Director Alex Avila were included in the complaint.

Workers who were able to evade the Kentex inferno may have been fortunate to have survived, but with no stable source of income, staying alive to make ends meet remains a challenge.

“I and my other co-workers share a simple aspiration in life,” said Michael Asarte, a machine operator of Kentex for 13 years, “We simply want to live with dignity.”

“We opted to stay with the company because we were promised by the owners that we will be absorbed by Kentex,” said Asarte.

After the fire, survivors of the tragedy looked for other means to support their families.

“We are offered to work via Valenzuela City’s PESO service but some are not hired because they do not meet requirements set by companies,” said Asarte.

PESO, or Public Employment Service Office, is a program offered by the local government posting job vacancies in different establishments.

Joseph Canillo, former Hydraulic machine operator for Kentex, revealed that they are also victims of unfair hiring practices. “Some aren’t admitted because of tattoos. Others because they didn’t meet the required height requirement,” he said.

“Some companies would usually promise to  call us if they have an opening, but they never call back. When they learn that we are from Kentex, they think up excuses not to hire us. They know that our agency has been delinquent in remitting dues for the Social Security System, PhilHealth and Pag-Ibig Fund. They say complications may arise if they decide to hire us,” he explained.

Canillo and Asarte volunteered as coordinators of Justice for Kentex Workers Alliance.

According to Asarte, the management of Kentex offered the victims’ families P136,000 as settlement. Although some families accepted, others refused the offer. The offer was later raised to P151,000.

Asarte insisted that it is not just money they are after.

“We need justice. And by that, we mean those responsible should be held accountable. They should be jailed,” he said.