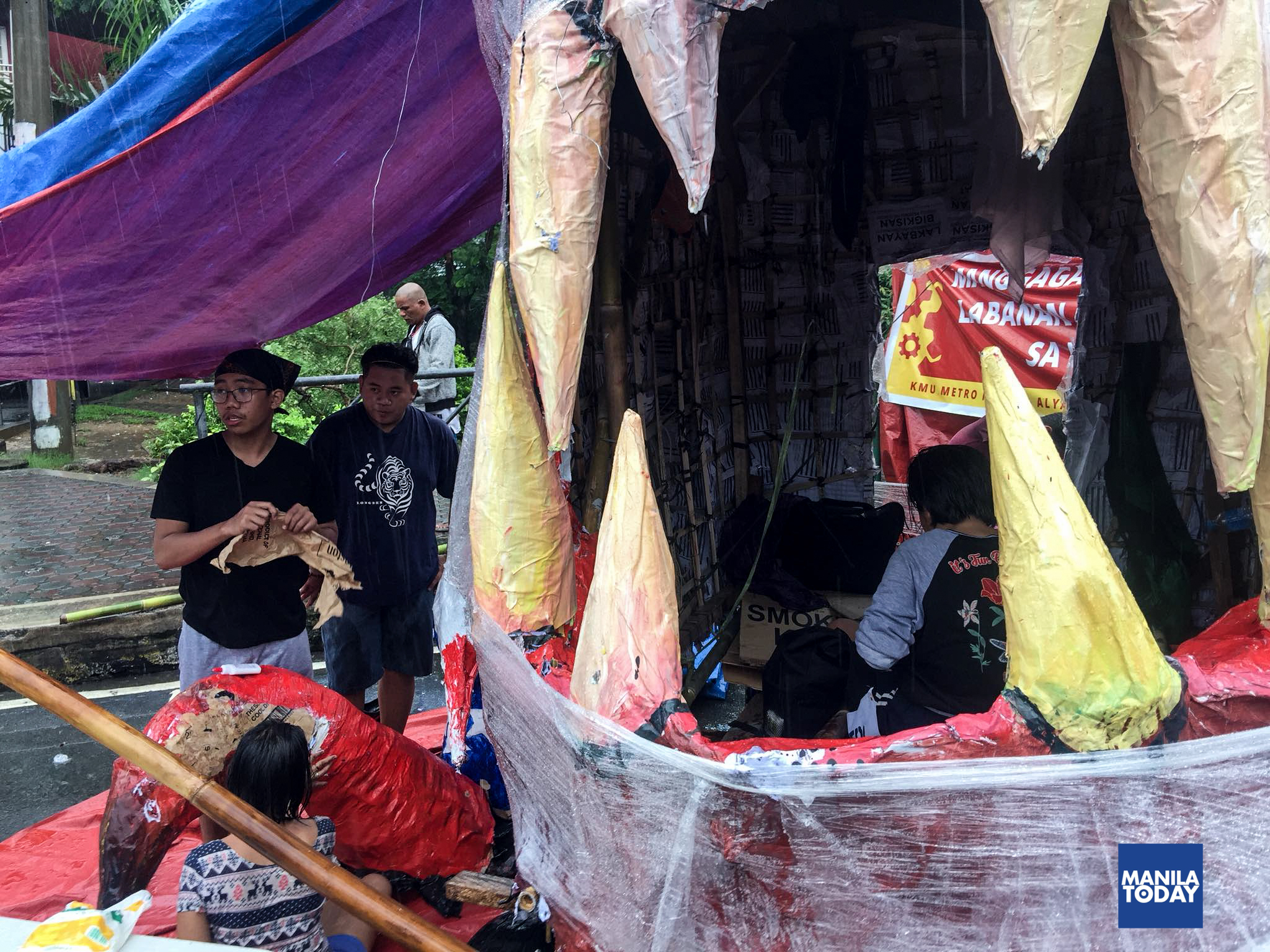 On the eve of the third State of the Nation Address (SONA) of President Rodrigo Duterte, labor groups will hold an overnight vigil tonight at their five-day anti-contractualization camp in Mendiola, dubbed as “Kampuhan Kontra Kontraktwalisasyon” (KKK).

Despite the heavy rain this morning, Southern Tagalog activists added up finishing touches to ‘Dutertemonyo’, a 13-feet effigy of President Duterte.

Activists will burn the said effigy as a symbol of their opposition against various anti-people policies and the government’s failed promises during the protest tomorrow in Quezon City in time for the third State of the Nation Address (SONA) of President Duterte.

The groups slammed the violent dispersal of cops during their rally in front of the US embassy yesterday.

Southern Tagalog protesters will then proceed to the University of the Philippines in Quezon City later today as terminated contractual workers remains in the anti-endo camp in Mendiola for an overnight vigil countdown to SONA.

Labor groups will hold an anti-contractualization caravan tomorrow to UP before merging with the bigger contingent for the United People’s SONA 2018.

Labor groups Kilusang Mayo Uno (KMU) – Metro Manila, Alyansa ng mga Manggagawa Laban sa Kontraktwalisasyon (ALMA Kontraktwal), Defend Job Philippines, and Kilos Na Manggagawa said they are set to hold an “Anti-Contractualization Caravan” on Monday from Mendiola to the University of the Philippines before merging with other groups in a march towards Commonwealth Avenue in Quezon City.

Before proceeding with the caravan, an early-morning protest rally will be held on Monday as they dismantle their tents in Mendiola.

Terminated contractual workers from different companies started to mount a five-day anti-contractualization camp in Mendiola on Wednesday to slam and remind the Duterte government of its failed and empty promises to end all forms of contractualization.

“President Duterte must show strong political will and decisiveness in enforcing their orders to regularize all contractual workers, especially those who have acquired regularization orders alreadly including PLDT, JFC among others,” said Ed Cubelo, KMU Metro Manila chairperson.

Cubelo added, “We hope that instead of executing its iron hands against the poor and powerless, Duterte must enforce his strongman rule against companies who continue to neglect and disregard the regularization order of his own government.”