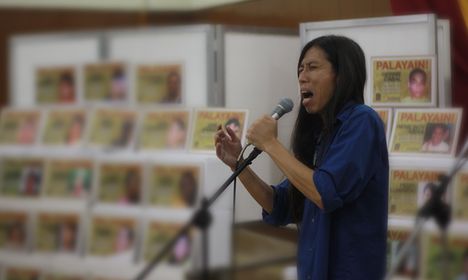 Peasant, cultural workers, and rights groups decried the killing of the artist Ericson Acosta along with farmer Joseph Jimenez in Sitio Makilo, Kabankalan City in the province of Negros Occidental on November 30.

According to reports, Acosta and Jimenez were captured alive by military troops of 94th and 47th Infantry Battalion of the Armed Forces of the Philippines (AFP) at around 2 AM of November 30. They were then reported to have been killed in an alleged clash between the military and New People’s Army (NPA).

Peace advocates called for an impartial investigation into the death of Acosta and Jimenez in light of the information that the two were captured alive.

“Pilgrims for Peace calls for the implementation of the Comprehensive Agreement on Respect for Human Rights and International Humanitarian Law (CARHRIHL) signed by both the GRP and NDFP, so that an impartial investigation may be conducted. We also call on the Commission on Human Rights to undertake the same,” said the group.

Marco Valbuena, spokesperson for the Communist Party of the Philippines (CPP) condemned the AFP in their “justification and cover-up on the willful killing of Acosta and Jimenez.” He noted that Acosta and Jimenez were unarmed and in no position to fight.

Acosta and Jimenez reportedly already suffered from stabbed wounds, before being executed.

Valbuena further slammed AFP’s allegations that there had been a gun battle as there was no NPA unit in the area, insisting that both Acosta and Jimenez were summarily executed by the military.

“The killing of Acosta and Jimenez violates international humanitarian law and constitutes a war crime. Being a member of the CPP/NPA, all the more that Acosta’s rights under the Geneva Conventions, and the [CAHRIHL], should have been respected. After being captured and their identities ascertained, Acosta should have been granted the status of a prisoner of war, and Jimenez, as a civilian,” said Valbuena.

Unyon ng Manggagawa sa Agrikultura (UMA) also lambasted the claims of the military, that they had to gun down the house of a civilian named Ronald Francisco to stage a so-called encounter. Francisco along with his wife and three children were detained in the 47th IB camp, added UMA.

Acosta is a former political prisoner, poet, and peasant advocate. He is also a peace consultant to the National Democratic Front (NDF) and is conducting social investigations in the Negros region since 2018.

He had been keen on integrating with hacienda workers and farmers and worked closely with their local and land struggles. He is notable for his contributions since 2016 and 2017 peace negotiations following his discussions and strengthening of the provisions under the Comprehensive Agreement on Social and Economic Reforms (CASER).

Duterte administration has declared “state of lawlessness” in the province of Negros, Samar and Bicol signed under Memorandum Order 32 on November 2018. Rights groups lambasted the memo, saying that it only intensified attacks and killings in the countryside as part of the former administration’s counter-insurgency campaign.

Nine peasant workers were killed, a bloodbath outcome of the memorandum, in the Sagay massacre.

Various counter-insurgency tactics and campaigns were endured by the above-mentioned provinces following the conception of Executive Order 70. Such policies like Oplan Sauron were said to claim the lives of Negros 14 in Canlaon, Manjuyod, and Sta. Catalina.

UMA scored 110 slain activists and rights defenders in the Negros province since the Duterte administration and now with Marcos Jr.

[Ericson and Joseph are the latest victims of MO32. Because their aspiration is a threat to the existence of the hacienda system, and it is better for the government to kill them to maintain the existing monopoly on land].

Echoes of rage and grief

The report on the killings of Acosta and Jimenez enraged the protesters who participated in the mobilization in time for the 159th Bonifacio Day in the morning.

In the afternoon, several groups then staged an indignation rally and candle lighting in the Commission on Human Rights, demanding justice while memorializing Acosta’s contributions to shaping up the society through his pen in promoting revolutionary arts and culture.

Sining Bugkos lambasted the military troops in their continuous waging of lies and fake warfare.

[NDF-Bicol is aware of the loss on the part of the country’s artists, the loss of Ericson and other artists, that we may have lost a revolutionary, propagandist, poet, composer, journalist, dramatist— but life does not end here, the revolution, the desire for liberation.]

According to them, the lives of Acosta, Tariman, and other martyred artista ng bayan will always be remembered as their contributions will live on, generations to generations will make use of their poems, songs, and art pieces in the relentless struggle for genuine change and democratic society.