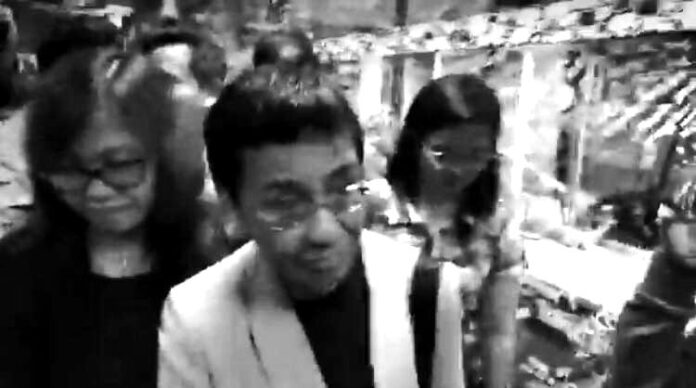 “The arrest of Rappler CEO Maria Ressa on the clearly manipulated charge of cyber libel is a shameless act of persecution by a bully government,” said the National Directorate of the National Union of Journalists of the Philippines (NUJP) in its statement.

At around 5pm today, National Bureau of Investigation (NBI) agents arrived at the Rappler headquarters and served the arrest warrant to Ressa and reporter Reynaldo Santos Jr. over an article published by Rappler titled “CJ using SUVs of controversial businessman.”

Various media groups and journalists saw the arrest of Ressa as “a clear attack on press freedom.”

They condemned the arrest for being preposterous for many reasons: (1) Ressa was was served a warrant as office hours ended and when courts closed, effectively preventing her from posting bail; (2) she was charged with a cybercrime act allegedly committed years ago but filed only now; (3) the alleged offense committed happened before the cybercrime law was passed; (4) the investigation on the case was closed last year by the NBI because of lack of basis but was transmitted now to the Department of Justice; and, (5) Pasay night court judge refused to accept bail despite having the powers to do so.

Ressa arrived at the NBI before 8pm. NUJP called on “freedom-loving journalists and citizens to gather at the NBI” to condemn the arrest of Ressa.

The Philippine Center for Photojournalism (PCP) linked Ressa’s arrest to Rappler’s critical voice on the administration.

“That the Duterte administration chose to selectively apply the law to a media outfit that has been critical of its governance is an indication of the lengths it will go to silence criticism,” said the PCP in its statement.

Maria Ressa and #DefendPressFreedom became trending topics on Twitter in the Philippines. Journalists were also campaigning with the call #HoldtheLine.

Arrest made after office hours

Rappler relayed what transpired during Ressa’s arrest in their statement.

“At least 4 agents and lawyers from the NBI’s Cybercrime Division came to serve the warrant signed by Manila RTC Presiding Judge Rainelda H. Estacio-Montesa. The warrant dated February 12, 2019 was served close to 5 pm today, when courts were about to close.

A complaint was filed by businessman Wilfredo Keng 5 years after a story was published on May 29, 2012, or months before the Cybercrime Law was enacted. Our story said former chief justice Renato Corona used a vehicle registered under the name of Mr. Keng, who, based on intelligence reports and previously published stories, had alleged links to illegal drugs and human trafficking. We called Mr. Keng and got his side before the story was published.

The filing of the case is preposterous and baseless. No less than NBI Cybercrime Division chief Manuel Eduarte closed an investigation in February 2018 after finding no basis to proceed, given that the one-year prescriptive period had lapsed. Eight days later, however, the NBI revived the case, and filed it with the Department of Justice on the basis of a theory they call continuous publication.”

Rappler also revealed that Ressa was accused of cyber libel allegedly because she was the editor of the story that was published; but also said Ressa was not the editor.

Rappler said they will not be intimidated by this new attack on their organization.

“We are not intimidated. No amount of legal cases, black propaganda, and lies can silence Filipino journalists who continue to hold the line. These legal acrobatics show how far the government will go to silence journalists, including the pettiness of forcing me to spend the night in jail,” Ressa said.

Aside from cyber libel, Rappler and Ressa are facing tax evasion charges. A year ago, the Securities and Exchange Commission (SEC) revoked Rappler’s incorporation papers, citing its alleged violation of the constitutional restriction on foreign ownership of mass media, which Rappler has already denied.

“Arresting someone who is not in hiding, at a time when it would be difficult to post bail, smacks of harassment. If Rappler were all praises for the government she would not have been arrested this way. The DOJ might have even dismissed the complaint against her,” said Colmenares.

“As a human rights lawyer, as a Filipino, I condemn the Duterte administration’s heavy-handed attempt to arrest Rappler CEO Maria Ressa.”

“Stripped of its legal trappings and judicial clothing, this arrest over questionable charges that have been excavated are essentially undisguised attacks on press freedom and speech.

Together with orchestrated cyber attacks and subtle blackmail on multimedia, this is not only effective censorship but practically prior restraint,” said Olalia.

“The arrest clearly intends to shame Ressa. But the shame lies squarely with this vindictive government,” said #BabaeAko in a statement.

The group also found ironic that the NBI has been tasked with the arrest as the agency had earlier recommended the dismissal of the cyber libel charge.

“A democracy cannot exist without a free press. As our journalists fight to defend press freedom, we call on Filipinos to hold the line with them,” urged the group.

LODI Arts and Media alliance also called for the defense of press freedom.

“Nobody believes for a single moment the concocted charges of tax evasion and foreign ownership. The truth is, the onion-skinned tyrant Duterte simply wants to shut down and punish both Maria and Rappler,” said LODI in its statement.

“We call on media and the public to defend press freedom and our right to freely report on, criticize and hold the president accountable,” the group concluded in its statement.