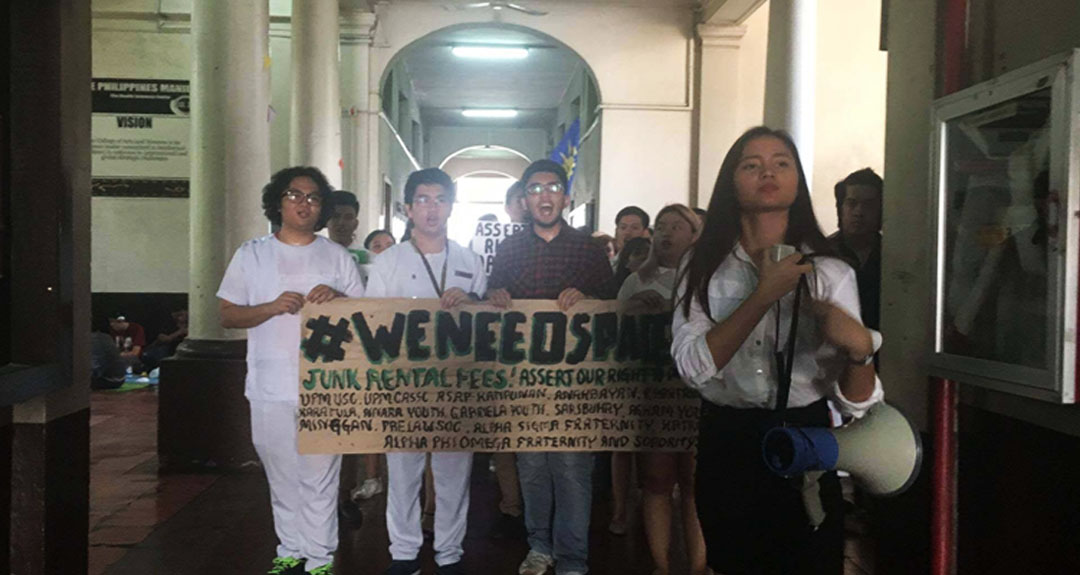 The University of Manila (UP) Manila campus, regarded as the Health Sciences Center of the UP system, spans 14 hectares and contains seven colleges, including the Philippine General Hospital (PGH). Despite this, students university-wide are at a loss for space in which to conduct their co-curricular and extracurricular activities.

Initially formulated in 2015 by then Vice Chair Pholyn Balahadia, #WeNeedSpaceNow is an ongoing campaign spearheaded by the Coalition of Organizations, Fraternities, and Sororities (COFS) and supported by the USC and Local College Student Councils (LCSC). The campaign calls on the UP Manila administration to provide tambayans, free rooms and accessible venues for all duly-accredited members of the COFS.

The problem of adequate space was further exacerbated in December 2016 due to the sinkage of the excavation site of the UP College of Medicine’s planned Academic Center. Consequently, the incident also weakened the foundations of surrounding buildings which forced the indefinite foreclosure of the UP Medicine Library and the University Library.

As a result of the University Library’s closure, Vice Chancellor for Planning & Development Michael Tee has proposed that a new University Library be constructed on the site of Paz Mendoza building or the Museum of a History of Ideas (MHI), either of which would require the demolition of the current building.

Vice Chancellor Tee’s proposal caused considerable uproar, especially from students of the UP College of Medicine (UPCM), many of whom feel that the closure of another of the college’s buildings would worsen their present lack of facilities and further compromise student learning.

The USC drafted a proposal on Free Hours which was forwarded to Vice Chancellor Tee in their dialogue last February 17. The proposal was accomplished through the collective action of the students which was reported to be highly noted by Tee.

On February 24, the UP Manila Administration sent its own version of the proposed rental fees to the USC. In response, the USC and student leaders drafted a student-version counter proposal last We Need Space Now (WNSN) Meeting, March 14. (See Figure 2)

Non-accredited student organizations will always pay in full, regardless of the facilities they use. However, Aljibe noted, this is no reason for the administration to charge fees to this segment of the student population. “Hindi porket hindi ka accredited organization ay hindi ka na dapat sinusuportahan at pinapansin,” he added.

The UP Manila Fiscal Policies and Operations Committee discussed and reviewed the Rental Policies, Guidelines and Rates for the use of UP Manila Facilities, as well as schedule of Utility and Space Rental Changes, last January 19. These were approved by Chancellor Carmencita Padilla on the 26th of January.

Section two of the Rental Policies, Guidelines and Rates for the use of UP Manila Facilities discuss rates charged to those renting a facility within the university.  Applicants for renting are divided to three categories: namely, ‘UPM users’, ‘Other UP’, and ‘Non-UP users’. However, no written distinctions are made between these categories.

Consequently, the section assigns no charge, 50% discount and no discount. The next section tackles purpose of use determining the type of user considering the purpose of the activity. It states that UP alumni are considered as ‘other UP users’ while activities of professional groups or societies fall under the category of ‘non-UP users’, even if a member of the faculty is present.

The USC affirmed their stand to abolish rental fees and extend library hours, and reiterated that having a designated tambayan will be a right.

On March 15, the administrative officers of CAS and the Department of Physical Education (DPE) held an emergency meeting to discuss the immediate transfer of PE classes to the CAS Student Center (StC). As a result, organizations whose tambayans are located on the 2nd and 3rd floors of the CAS StC are to lose their duly assigned areas. In response, the CAS Student Council (SC) worked with Office of Student Services (OSS) Coordinator Mishima Miciano to finalize a plan in which university-wide organizations are to be transferred to the CAS quadrangle while CAS-based organizations will be relocated to the side of the newly-completed UPM theater.

For other colleges, the lack of places for student recreation is an equally pressing issue.

Students from the College of Public Health (CPH) conveyed their concern that the future construction of the Zuellig Building will deface the PH Lounge, a collective project of batches of PH students and alumni. The lounge serves as a multifunctional hall to the PH students.

Aside from this, the Museum of a History of Ideas (MHI) was one of the venues planned to be demolished for other purposes. A cultural organization noted the MHI to be a relatively affordable venue with good acoustics in the whole campus.

Space as a Right

In an interview with Office of Student Affairs (OSA) Director Dr. Tristan Ramos, the on-going scheduling for the dialogue between the students and the administration was discussed. Ramos also tackled the assessed conditions within the campus regarding space and facilities.

Currently, Ramos explained that students who need to rent spaces within campus would have to pay rental fees in order to compensate for the consumption of utilities (electricity, water, etc.). However, he noted that these fees are prone to increase, which makes many students incapable of paying them. This led him to propose new rates for student usage.

“Ibig sabihin, there would be university-based organizations that can use some of the facilities free for, let’s say, 10 hours, ganun. So hindi siya talaga totally free for the whole semester,” he explained. “Well, basically, ganun ‘yung prinopose ko, dahil we should give equal priority for all the student organizations. Para naman hindi ma-monopolize ang certain areas, [and] at the same time, to give some form of responsibility rin sa mga organizations.”

In light of the proposed changes to the university’s rental fees, the USC has asserted that it shall strive for better solutions to the concurrent problem of inadequate facilities. Furthermore, the call for free education along with the junking of other school fees stands and the struggle to fight against repressive and commercialized education stands.

This article was originally published in The Manila Collegian, the official student publication of the University of the Philippines-Manila, and was redacted for publication in Manila Today.