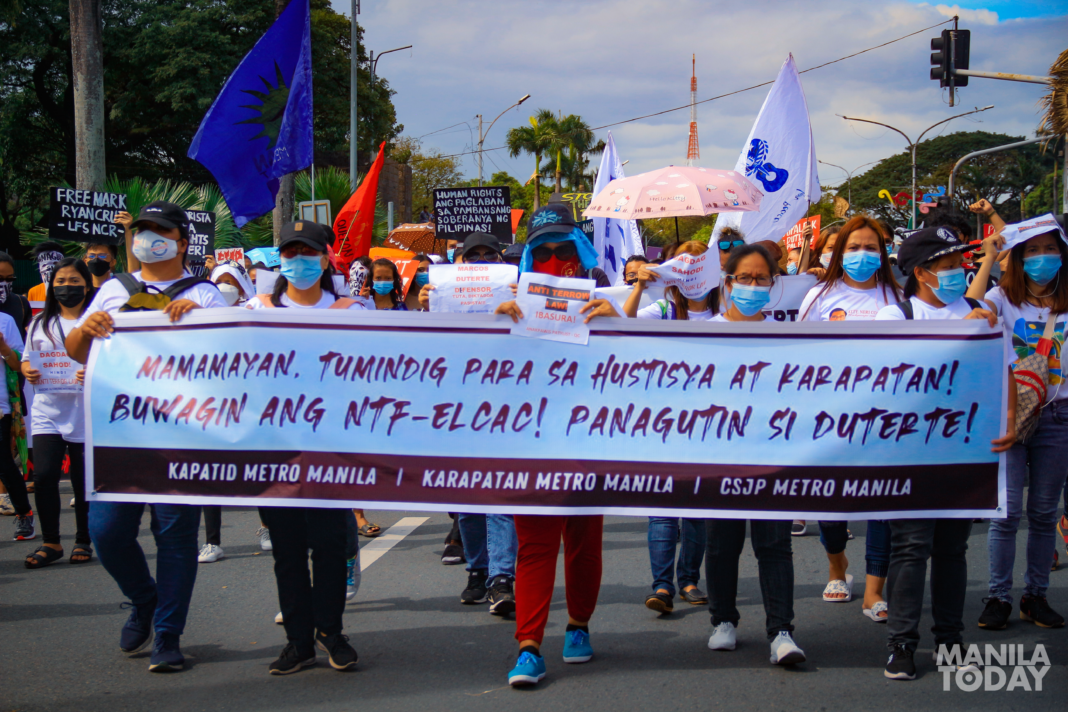 Various progressive groups conduct the 73rd International Human Rights Day protest at the University of the Philippines – Diliman, scoring the six years of state terror, violence, and repression that the Filipinos have endured under the Duterte administration.

The groups said for six years the Philippines has turned into a killing field given the administration’s “murderous regime” with the vigilante-style of killings at the height of his bloody drug war campaign. Six years that legal activists and dissent face numerous human rights violations—be it in the forms of red-tagging, arrests on trumped-up charges, extrajudicial killings, and enforced disappearance.

Rights group KARAPATAN noted that the killings and the systematic violations of people’s rights have only continued with brazen impunity. As of November 2021, out of 712 political prisoners, 489 were arrested since Duterte sat in power. Accordingly, 424 were slain with regard to his wage on counterinsurgency campaigns even amid the onslaught of the COVID-19 pandemic.

“We are called to demand that the drug war be scrapped in favor of comprehensive, health-centered, and rights-based responses to address drug addiction; that the NTF-ELCAC must be abolished along with junking of Duterte’s terror law to pave the way for resumption of peace talks, the just and humanitarian release of all political prisoners, comprehensive socio-economic and political reforms that address the roots of the decades-long armed conflict, and the attainment of just and lasting peace in the country,” KARAPATAN secretary general Cristina Palabay stated.

This year’s IHRD commemoration, the groups remember the victims of the human rights crisis—especially during the Marcosian rule until Duterte. According to them, the Filipinos cannot let another six years of the same deadly campaigns to persevere now that the children of both Marcos and Duterte are about to run for 2022 national elections.

The groups furthered that not only should Filipinos vote for leaders to uphold their basic rights but also participate in the hard-won struggle for rights and freedom against tyranny and dictatorship.