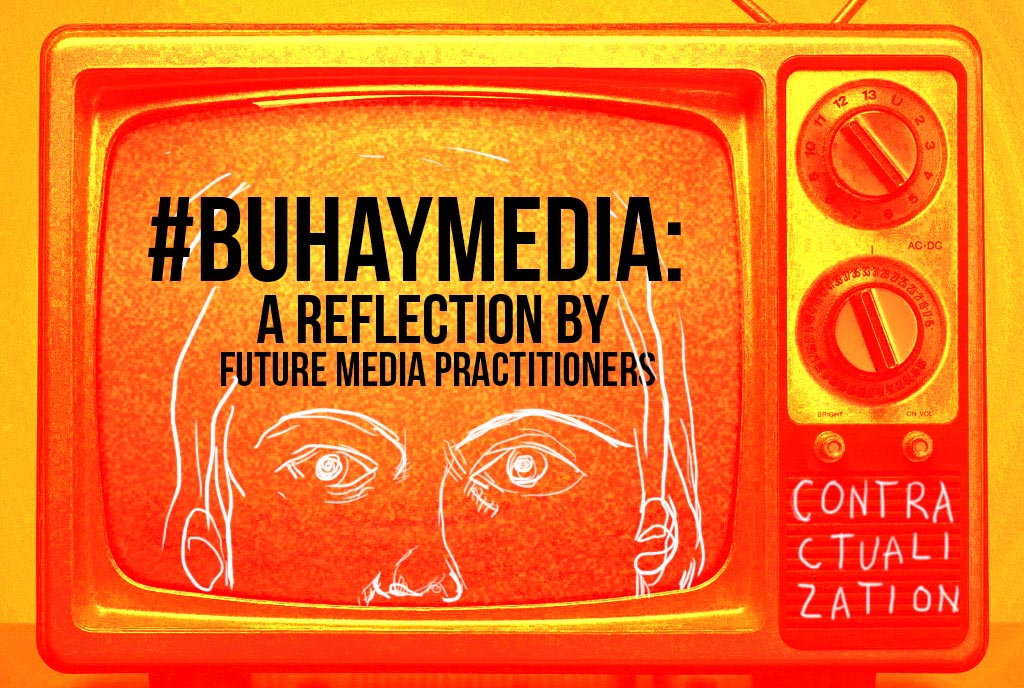 “Some of us were blinded by passion and the risk of losing their jobs.”

These were the words of Ms. Sharon Rose Masula, Executive producer of Reel Time in GMA-7, when asked why media workers continue to experience contractualization for a very long time.

In the forum “TAG: We’re it!” held at the University of the Philippines, Diliman, three GMA-7 talents voiced out their plight and struggles as media workers of the network giant.

Ms. Sharon said that she was a segment producer in GMA-7 network for 11 years and she was contractual worker until she was dismissed from work. This situation persisted despite her hard work and dedication to her job, as proven by her years of experience and award-winning episodes. GMA-7 has actually received its first George Foster Peabody Award for Reel Time’s documentary “Salat.”

The talents also said that “when a program ended, you have to find a job again or renew your contract.” But why is there a need to renew contracts?

The existing Labor Code of the Philippines indicates that “regularization occurs if one’s job is necessary to the employer after six months of being a probationary employee,” It is obvious how this law is often disregarded because contractualization has become prevalent in various industries in our country.

A lot of you may have heard that being a media worker rests more on one’s passion than the job itself; that being able to bring stories closer to people and effect change are enough rewards for media practitioners.

Yet, not giving what is just for media workers—regularization and security of tenure—we still think it’s unfair. They are not some kind of superhuman who don’t get tired or sick. We think what they are asking and fighting for, they truly deserve for what it’s worth.

“Nawawalan ka ng dangal ‘pag hindi ka nareregular [You lose your dignity if you are not regularized],” said University of the Philippines College of Mass Communication (CMC) Professor Danilo Arao.

As one of the fathers of many CMC graduates, being a journalism professor for many years, Prof. Arao was saddened that after four years in college, many of his students just end up as a contractual worker with unsecured future.

The media has become a profit-oriented business, largely concerning itself with the ratings of shows. It manifests through sensationalism of news, formulaic plot of teledramas, showbiz news, among others.

Contractualization has become prevalent, but it doesn’t mean that it’s right and normal. As future media practitioners, we think it is worth to join the fight against media commercialization. As they say, “Kung hindi tayo, sino? Kung hindi ngayon, kalian?”

TAG talents believe that GMA-7 violates their right to work and regular employment.

At the last day of December 2014, the giant network terminated its 52 talents due to their refusal to sign the revised contract, Project Employment Contract (PEC). They refused to sign it because they believe that the revised contract still doesn’t solve the problem.

After six months, after a year, ten years or fifteen years, they remain contractual. Why? Because GMA insists that that’s the way it is. If the show is gone, you will be jobless

Ms. Sharon added that as talents, they are not entitled to benefits, such as SSS, PAG-IBIG, and Philhealth, regardless of how long they have been with the network.

The irony is that these journalists and media workers are also the ones who work for news and public affairs programs that promote accountability, transparency and fairness. They are the country’s watchdogs, purveyors of truth, and dispensers of public service. However, the corporate media industry has also become one of the worst violators of the country’s labor laws.

In the end, we must realize that the fight to end contractualization is every worker’s fight.

Things to be done

However, being aware isn’t enough. We should act and do our part to expose and fight contractualization in the media.

Media workers from GMA-7, TV5, and ABS-CBN have already taken steps to end the contractualization practiced by media networks. Everyone can do their part to help, especially the students who will later be working in the media industry.

In the end, we must realize that the fight to end contractualization is every worker’s fight.

[Sebastian, Mendoza, and Pablo are graduating journalism students of the Polytechnic University of the Philippines in Manila. They are also interns of Manila Today. This opinion article was done after attending the media forum of Talents’ Association of GMA (TAG), and is also part of their requirements as interns.]