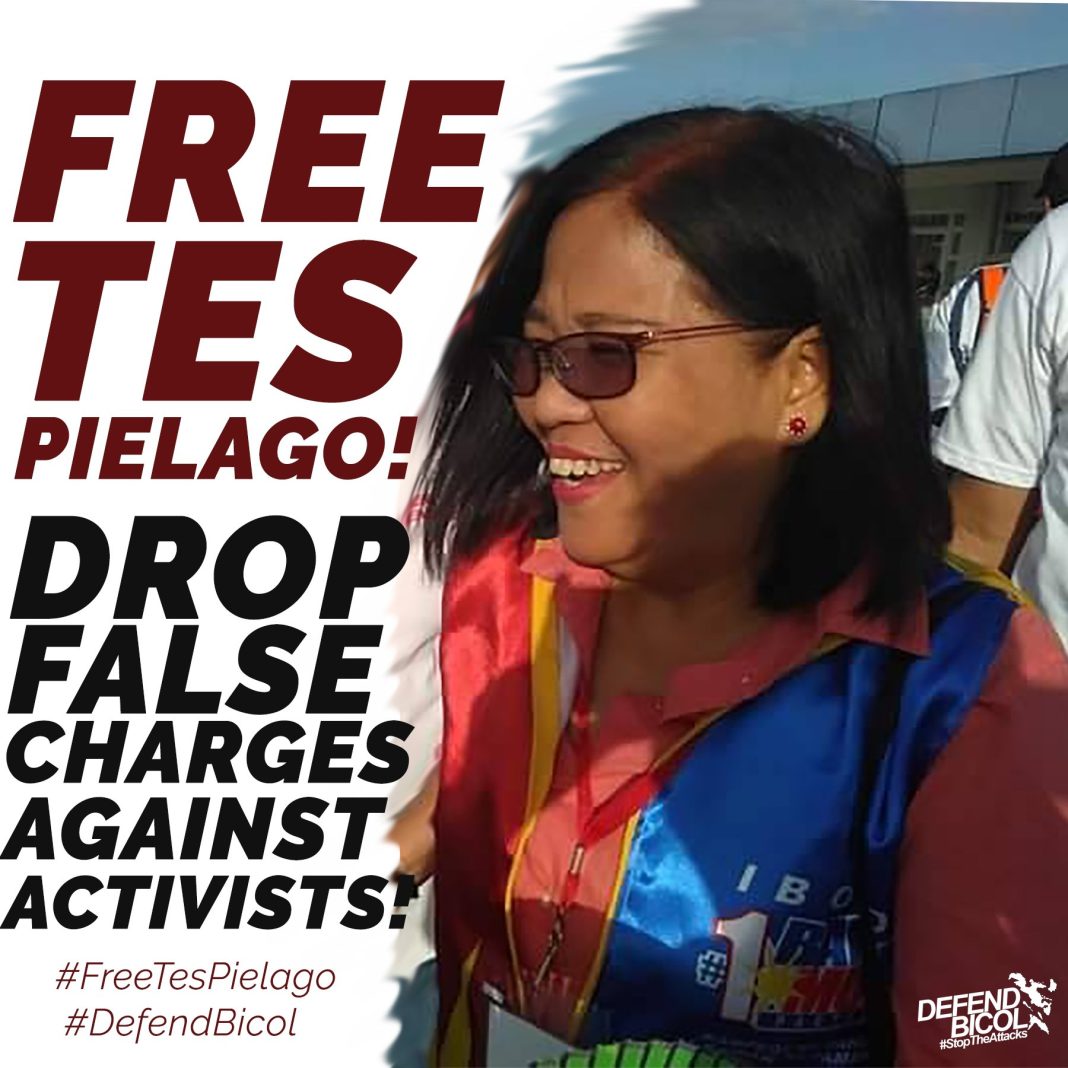 It did not hamper the Regional Intelligence Division 5 accompanied by a team of police personnel to serve a warrant of arrest against the 63-year old ailing activist regarding a Murder and Frustrated Murder case.

BAYAN MUNA representative Carlos Zarate affirmed that case is loosely based on the fabricated narrative and modus of the National Task Force to End Local Communist and Armed Conflict (NTF-ELCAC).

“The Marcos administration’s NTF-ELCAC is apparently just continuing the same old tricks of the notorious agency created and unleashed during Duterte’s time,” said Zarate in a statement.

Defend Bicol Stop The Attacks Network described Pielago as a women rights and consumer rights activist who have long been fighting for the democratic rights of the Bicolano people. According to the network, this case is another vile attempt to silence those fighting and those who have fought for the rights and welfare of the people in the political and economic crisis-stricken Philippines.

“We demand the immediate dismissal of the cases filed against our colleague Tess Pielago; we demand for her immediate release as she is innocent of the bogus charges filed against her. Pres. Marcos Jr. should order a stop against these attacks on human rights defenders and progressive leaders like Tess,”  Zarate continued.

Two Lumads namely Ismael Pangadas, 22, and Mawing Pangadas, 19, have been arrested at the Freedom Park along Roxas Boulevard in Davao City just after joining the local State of the Nation Address protest.

Both are slapped with charges of child-trafficking among other allegations as reported by Kabataan Partylist Southern Mindanao.

Kabataan Partylist meanwhile taunted that it had to be ironic given that Sara Duterte, who wore a traditional lumad dress in Marcos Jr.’s first SONA ceremonies, whle in her own hometown, actual Lumads like Ismael and Mawing have been oppressed and faced baseless charges.

Meanwhile, a 50-year old farmer and a nine-year-old child were the recent victims of military attacks in the province of Batangas.

Karapatan Southern Tagalog reported that on July 18, a child named Ineng was killed by the 59th Infantry Batallion at Sitio Sentro, a few kilometers away from Sition Amatong while herding livestock in their farmland along with her father and 14-year-old sibling.

While there had been an encounter between the 59th IB and the red army, the former insisted that that there were two encounters and the child was killed by the New People’s Army.  Accordingly, such allegations were directly refuted by residents of Sitio Sentro, that they have only heard a single shot and hit the child’s head.

Eight days after, Maximino Digno was slain by the 59th Infantry Battalion while harvesting coconuts on their farmland on July 26.

The 59th IB then accused Digno as a member of the NPA and reported that he had been killed in an armed encounter. As a matter of fact, residents noted that Digno had a mental disability.

[The NTF-ELCAC has been creating fake narratives and fabricated cases for a long time. It primarily targets human rights defenders like Pialago, intensifying violence in parts of Batangas, Davao, even here in Metro Manila]

Trinidad asserted that while these military attacks happen to progressives, it can happen to ordinary citizens who express legal dissent and criticisms especially at the helm of Anti-Terrorism Law continued under the administration of Marcos Jr.

[Protest is a basic right of the people, but the government does not want to listen to us and instead boasted when SONA took place. There was no plan laid down and eventually, urban militarization continued along with the manifestation of left-to-right arrests, enforced-disappearances, and murders,”

Back in 2019 and 2020, a string of raid operations transpired in the metro and arrested a number of activists.

Reina Nasino, Alma Moran, and Michael Tan Bartolome collectively known as the Tondo 3 have been arrested in a midnight police raid at the Bayan Manila Office in Tondo last November 5, 2019. They were accused of possessing guns and explosives. The same accusation happened to Manila Today editor Lady Ann Salem and trade unionists Rodrigo Esparago, Dennis Velasco, Romina Astudillo, Jaymie Gregorio, and Joel Demate or known as the Human Rights Day 7 who have all been arrested last December 10, 2020.

While Salem, Esparago, and Velasco’s cases have already been dismissed due to material inconsistencies of police narrative, there were four activists of HRD7 still being imprisoned.

[On the other hand, the police and the military are also attacking the communities here in the NCR, particularly in Quezon, in Manila, in Taguig just because they are calling for an increase in wages and a decrease in the price of basic goods]

BAYAN NCR campaigned for P203 wage increase all board alongside the elimination of excise tax on oil products and soaring prices on food and basic commodities.

[It is only right to stand up, move forward and fight against the fascist regime that has just started]