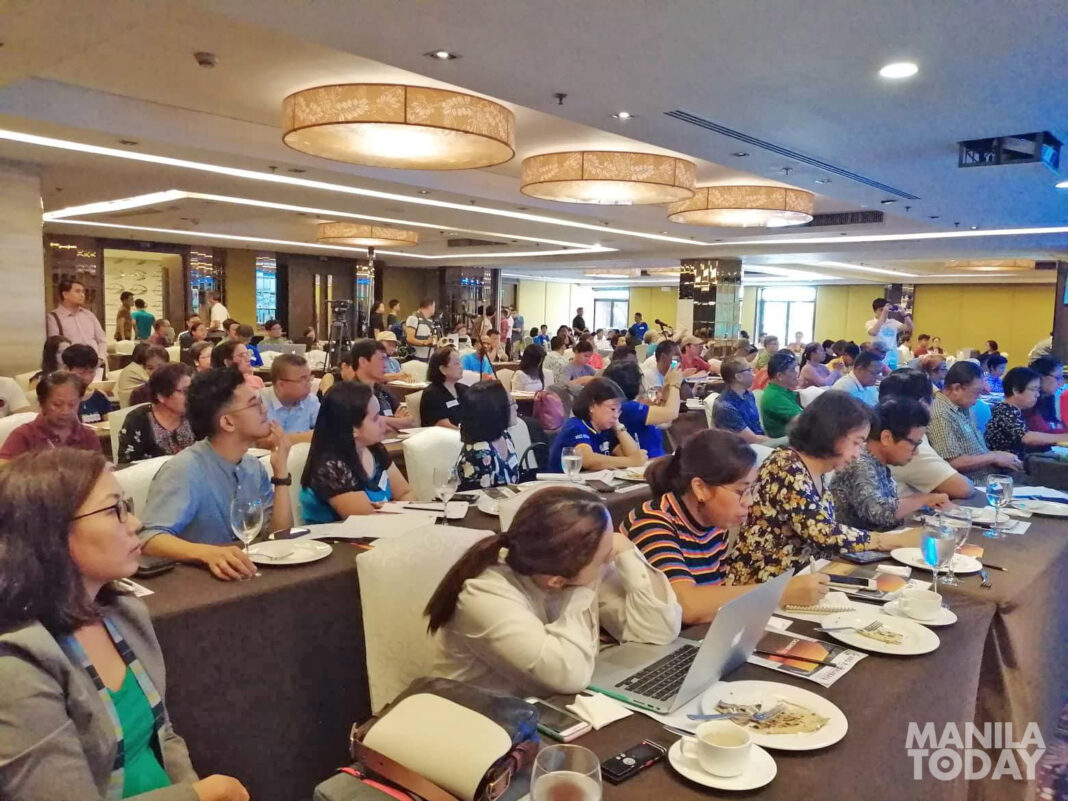 Over 200 leaders and members of fisherfolk, urban poor, environment and church groups from across the Philippines gathered in the 2nd People’s Summit on the Impacts of Reclamation today at Bayleaf Hotel, Intramuros Manila.

After six years, the 2nd national conference aimed to reinvigorate the people’s call for a moratorium on reclamation projects in the country.

According to Leon Dulce, spokesperson of Peoples’ Niche, the people need a national reclamation moratorium to avert the impending ecological crisis expected from reclamation policy developments under President Rodrigo Duterte.

“At least 11.24 million people may significantly be impacted by reclamation projects covering 39,414 hectares, threatening coastal and marine landscapes across the country,” Dulce added.

“These are the hectares upon hectares of wetlands and marine habitats where rare migratory birds converge, where fish breed and feed, and where millions of people subsist for their sustenance and livelihood. These are the green corridors that are our first and last line of defense from growing risks of storm surges, floods and other disasters,” Dulce said.

“The order mandates the PRA to come up with a reclamation and development plan. Not a single reclamation project should be approved through this plan without concretely fleshing out which areas in the country should be off limits to reclamation based on science and social justice,” Dulce said.

People’s Niche cited that the areas with clear ecological zoning such as the key biodiversity areas and rehabilitation areas in Manila Bay and the marine protected areas and ecotourism sites in Cebu and Tanon Straits should be declared reclamation-free.

“EO 74 does not present anything new on environmental regulations. It is silent on the displacement of fisherfolk and urban poor communities. But it promotes efficiency and ease of doing business in the reclamation industry, even allocating a development fund for scaling up PRA’s reclamation capacity,” Dulce said.

Peoples’ Niche cited that almost 50,000 to 110,000 families would be displaced if the reclamation projects in Manila Bay pushed through.

Alexander Rosales, spokesperson of Baseco Peoples’ Alliance expressed dismay with the reclamation projects that would affect their communities. He said that the government has no development plan in their areas that would benefit the poor and the reclamation will further prohibit the demolition and eviction.

[There is no means to live with the reclamation in our place. It will not give us jobs, only suffering. It will destroy our homes and our environment, that’s why we oppose this.]

He also slammed the Build, Build, Build Program of Duterte that will give the reclamation authority to the massive destruction of livelihood, houses and environment.

Monique Anastacio, spokesperson of Samahan ng mga Mangingisda at Mamamayan ng Bulakan at Obando (SMBO), strongly opposed the construction of Aerotropolis because it will destroy their livelihood, shelter and environment.

“This billion-peso project will never compensate for our priceless future that will be ruined just in the name of colossal profits of the elite few,” she said.

The conference was organized by the Peoples Network for the Integrity of Coastal Habitats and Ecosytem (People’s Niche), a national alliance advocating for ecological restoration as an alternative to land reclamation.

The two day confab hosted discussions from scientific, legal and social experts expounding on the varying impacts of land reclamation to communities. The outcomes of this convergence were expected to usher in an era of ecological restoration, and not devastating reclamation for our coasts and the people whose lives depends on its integrity.