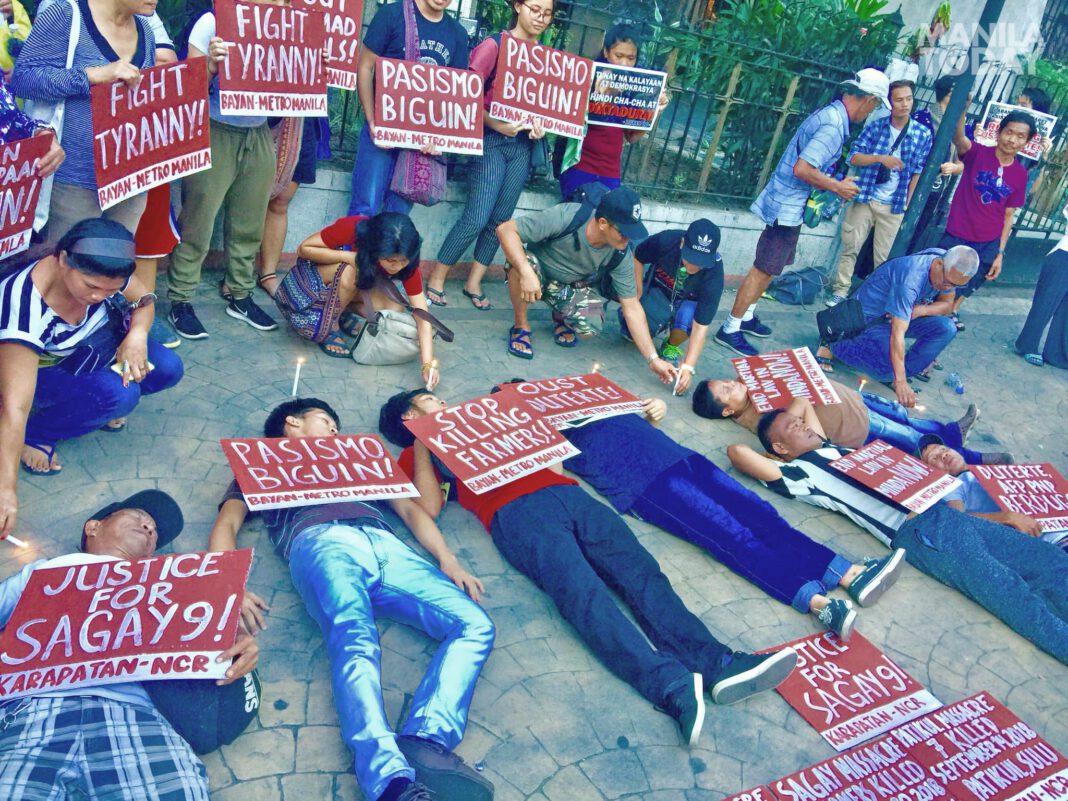 “We are lighting candles not only to remember the lives taken by the brutality of this regime, we are also demanding the accountability of the perpetrators of the massive killings, harassments, and repression and justice for the victims,” said Rev. Dionito Cabillas, spokesperson of Bagong Alyansang Makabayan Metro Manila.

The group said the recent massacre of nine farmers, including women and children, involved in a ‘bungkalan’ (cultivation) program at Hacienda Nene in Sagay, Negros Occidental is only the latest in a line of massacres under President Rodrigo Duterte.

They also lit candles for those who died in Sagay.

“There were also the massacre Lumad farmers in Lake Sebu last year, also first paraded as an encounter between insurgents and State forces and the recent Patikul massacre which took the lives of seven young farmers who were maliciously accused by the Armed Forces of the Philippines as members of the Abu Sayyaf Group,” Cabillas said.

This makes Duterte “not different from the past regimes, especially his most revered fascist dictator Ferdinand Marcos, Duterte’s rule is marked by series of massacres,” Cabillas added.

Karapatan has recorded over 13 cases of massacres across the country from 2016 up to present.

“Over 13 massacres took place and not one perpetrator has been brought to justice. The culture of impunity is alive and well, while the people, especially the poor and working classes, die either a slow painful death through hunger or a swift, violent one through the gun,” Cabillas emphasized.

The group also iterated their disgust over rising prices of basic commodities and services.

“It is enraging that as the cost of living in our society skyrockets, the killings keep on rising too. Because more and more people will be protesting from the injustice, the government takes a fascist approach to silence dissent,” said Cabillas.

He also said, ‘the government keeps on boasting ‘change’ through superficial progress, all of which are beneficial to multinational corporations, their lapdogs in the bureaucracy, and the very few elite families” said Cabillas.

The group also decried the Red October fiasco of the military. They claim that the reality of the conspiracy is contrary to the government propaganda and fear-mongering.

“The Red October Plot has completely unfolded – it is no ouster conspiracy, but another killing spree by a trigger-happy fascist regime. Duterte and his minions must be reminded that the more the people bleed, the more they become ready to fight,” he added.

Cabillas appealed to the Filipino people to ‘unite and struggle against the injustices perpetuated the government.’

“There’s neither change nor future for the people under our present circumstances if we allow this condition to prolong and bleed us dry. Real change and justice will only prevail through our unity and strength,” Cabillas ended.