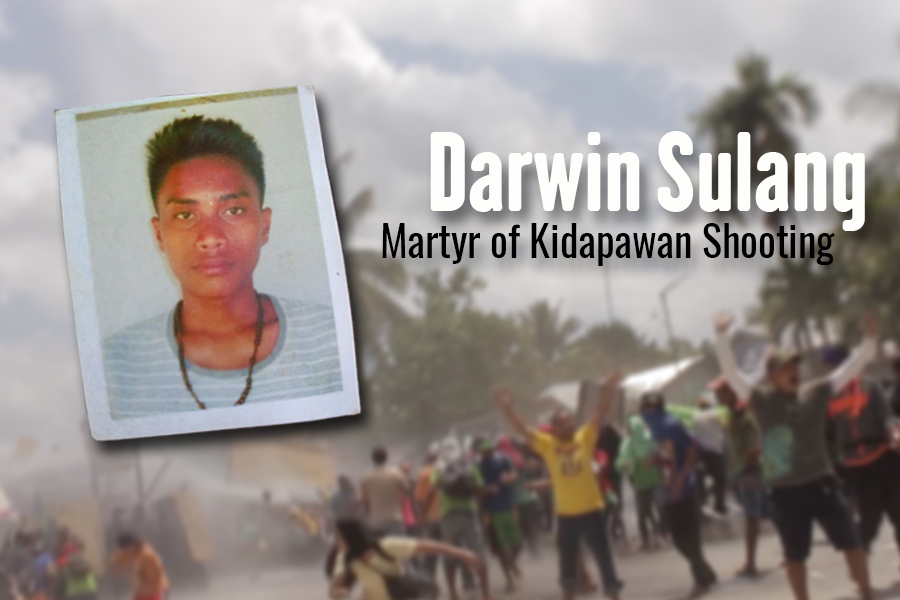 Darwin Sulang was only 22 years old.

Almost three days have gone since the bloody dispersal before his parents Ebao, 50, and Annalyn, 40, confirmed news of his death.

Ebao and Annalyn have been taking refuge with more than a thousand farmers at the Spottswood Methodist Center since the bloody dispersal of the farmers’ barricade on April 1. The couple was unable to leave the property of the United Methodist Church (UMC) due the police blockade that prevented people from coming in and out.

The national fact finding mission (FFM) Help Kidapawan, led by Karapatan, Bagong Alyansang Makabayan and Kilusang Magbubukid ng Pilipinas joined by Kilusang Mayo Uno, Gabriela, Alliance of Concerned Teachers and Anakbayan among others arrived at Kidapawan on April 4. A team from the FFM and a lawyer from the National Union of People’s Lawyers accompanied Ebao and Annalyn to search for Darwin’s body and claim it.

Ebao and Annalyn were able to see and claim Darwin’s body from Woodhaven Chapels in Barangay Manongol, Kidapawan City on April 4. He was one of two who died in the violent dispersal.

Police reports shown in media have already told how Darwin tested positive in a paraffin test before Ebao and Annalyn could gain custody of their son’s body. Only the police knew of the location of Darwin’s body since April 1.

Ebao and Annalyn brought home to Malibatuan their dead son while their demand for rice subsidy from the government was still not met.

Darwin worked as a security guard in Davao City. Having that job made him the family breadwinner.

He took time off his work to go home to Arakan. It was during his vacation from work that he joined his parents and their fellow farmers in their protest to Kidapawan City. He was a farmer himself and a member of a farmers’ group in Arakan.

Even from the home of the Sulangs, vast areas of dried up crops could be sighted. The farmers have dutifully and painstakingly planted, only to lose the seeds, money, time and labor they sowed. It was the situation that prompted the farmers to troop to the provincial capital to demand that food subsidy be released in their picketline, for their hungry stomachs could do no more with the politicking and red tape in government.

“Proud ako kay Darwin dahil namatay siyang nakikipaglaban. Sana sa pagkamatay niya ay tulungan kami na ibigay ang dapat samin, at makamit namin ang hustisya sa nangyari sa kanya. [I am proud of Darwin because he died fighting. I hope in his death, we will get what we is due to us, and that we will get justice for what happened to him.],” said Ebao of his martyred son.