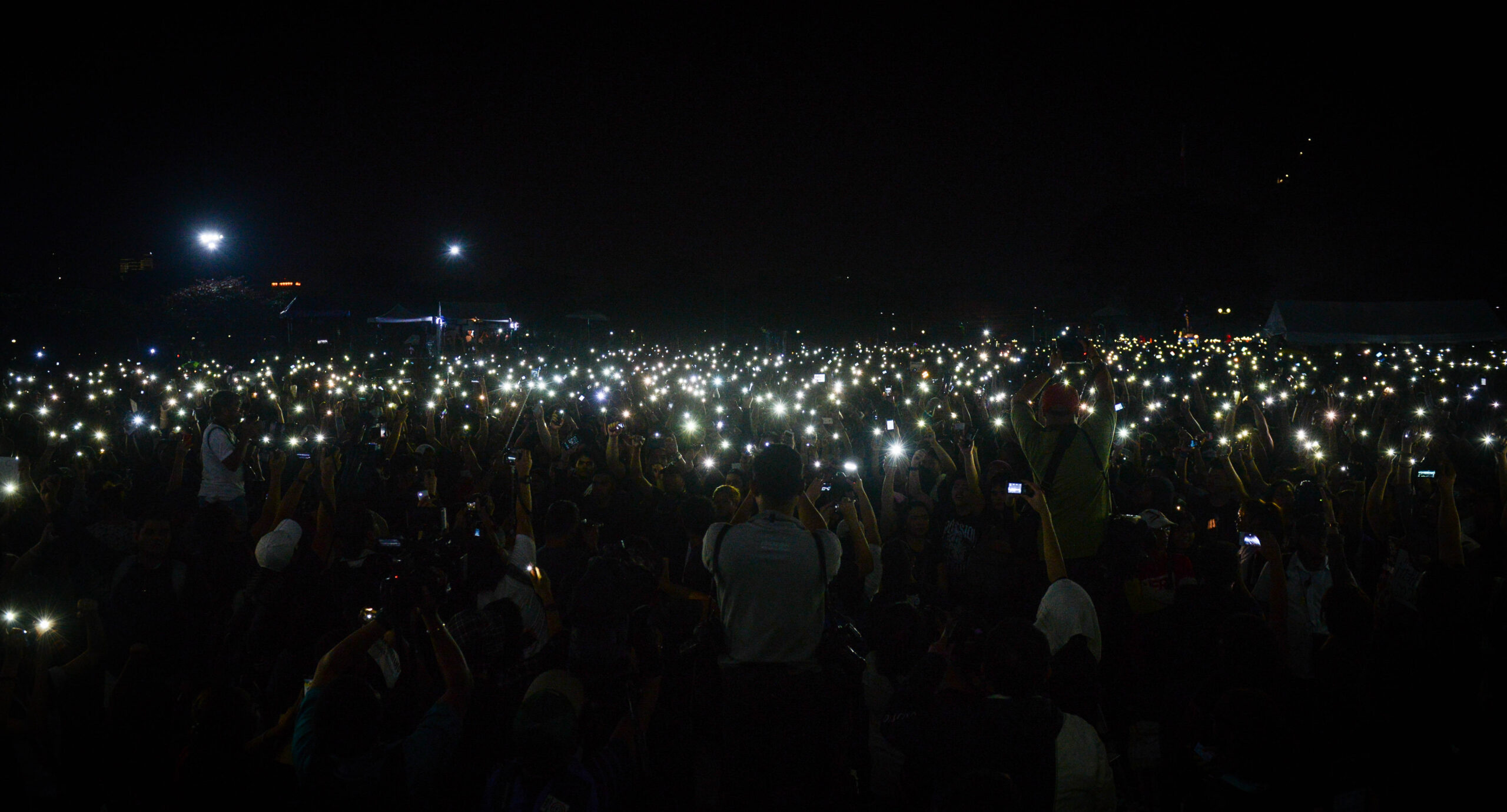 It was a gloomy and rainy afternoon on November 25 as typhoon Marce just entered the Philippine Area of Responsibility. But the streets of Manila were flooded with a sea of people clad in black shirts roaring with chants of “Marcos, Hitler, Diktador, Tuta!”

The marchers were mostly students from different schools, colleges and universities from Metro Manila. The march ended in Rizal Park, or Luneta, where a stage was set up in front of Quirino Grandstand for a grand rally to condemn the hero’s burial of the late dictator Ferdinand Marcos at the Libingan ng mga Bayani (LNMB) the Friday before.

On November 18, Filipinos were ­­­startled with the news that the remains of Marcos were already being transported via Air Force’s chopper from Ilocos Norte to the LNMB. The Marcos family kept the plan under wraps. The Armed Forces of the Philippines (AFP) was well prepared for the state honors still.

The burial was just ten days after the Supreme Court’s rejected the petition for preventing the burial of the late dictator at the LNMB. There was still a 15-day window for appeal but the Marcoses went ahead with the burial.

Series of protests against the burial erupted on the same day with what most protesters saw as the exoneration and political resurrection of the Marcoses.

An estimated 15,000-strong crowd attended the rally at Luneta, although organizers from the Campaign Against the Return of Marcoses in Malacañang (CARMMA) estimated that the crowd peaked at 20,000 as people coming from school and work were still pouring in as night fell.

In a historic event, youth from different schools in Metro Manila once again converged for a similar cause.

Faculty and administrators in some of the the said schools and members of different people’s organizations also attended the rally.

For Jillian Gaiety Siervo, a 16-year-old Grade 10 student from Manila Science High School (MaSci) who joined the rally at Luneta along with her classmates and teachers, the Marcos burial was more than moving on from the past but about the restoration in power of the Marcoses.

“We are smarter than what the people think and we are capable of thinking for ourselves because as future scientists they are trained to learn from facts and not stop at formulating hypotheses,” said Siervo answering criticisms in social media against high school students protesting Marcos’ burial at the LNMB.

Siervo said that they learned about Marcos’ atrocities during his dictatorship from books, exhibits, seminars and from real experiences of Martial Law survivors and even from their parents.

Kabataan Party-list Representative Sarah Jane Elago said that the implication of Marco’s burial at the LNMB is the continuing culture of impunity and giving honor to plunderers and human rights violators.

Elago is pertaining to the comeback of the Marcos family in Philippine politics and their still wealthy lifestyle. Currently, Imelda Marcos is the Representative of Ilocos Norte while her daughter is the governor. The late dictator’s namesake Ferdinand “Bongbong” Marcos, Jr. is a former Senator and ran for Vice President placing 2nd in the race.

From witty and funny to serious and militant placards, youth filled Luneta with calls showing that they know more than what they have been portrayed.

An effigy portraying Marcos with a lot of money in a coffin was made by Ugatlahi Artist Collective. Placards with data on human rights violations and money the Marcos family stole were placed alongside the coffin.

“The effigy symbolizes the impact of Marcos’ burial at the Libingan ng mga Bayani, that his sins against the people like human rights violations and plunder will be buried alongside him,” said Luigi Almuena, Spokesperson of Ugat Lahi.

Passing on to the youth the torch of struggle

As Renato Reyes, Jr., Secretary General of Bagong Alyansang Makabayan (BAYAN) addressed the crowd in Luneta, lights were turned off and thousands of lights from gadgets of demonstrators filled the grounds at Luneta with the roar of their chants against the return of the Marcoses to power.

“Tayo ang liwanag sa dilim, ang dagitab sa kawalan, ang alab na hindi huhupa, ang apoy na hindi mamamatay at tayo ang pag-asang hindi mabibigo! (We are the the light in the dark, we are the spark in the void, we are the blaze that will not subside, the fire that never dies and we are the hope that will not fail!),” exclaimed Reyes while the crowd flash their lights.

Rody del Rosario, now 80 years old and founding member of Kabataang Makabayan, was in high spirits seeing the large participation of the youth during the Black Friday rally at Luneta. Kabataang Makabayan is the militant youth organization who led thousands in protests during Marcos’ dictatorship.

During the program at Luneta, Martial Law survivors who fought the dictatorship were recognized and was called on stage. They sang “Linyang Masa”, a song popular with activists during the dictatorship. Youth leaders were called to come up the stage to symbolically passed on the torch of the struggle to the youth.

Crisostomo firmly stated that the youth would not allow that Marcos would be recognized as a hero by the current rotten system. He vowed to continue the fight against dictatorship of the present ruling class and the revisionism of history.