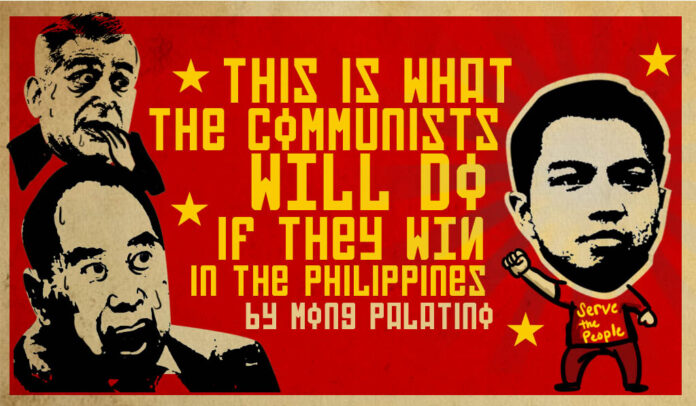 Beware of communists, they will confiscate your properties after forcing your family to live in a labor camp. Is this true? Perhaps yes, but only if you belong to the .01 percent of the 1 percent of the ruling elite, and only if your family’s political record is scandalously brutal. Otherwise, your middle class status does not automatically make you an enemy of the working class.

But communists are still feared and hated as if they are always plotting the destruction of our happy lives. It is the filthy fascist rich who are and should be afraid of the specter of revolution yet they are able to conjure the source of their fear as a real social evil which the chattering classes are told to exorcise. Even the poor are sometimes cajoled to express an irrational fear of radicalism, or any other politics which could emancipate them from the cycle of intergenerational oppression.
It is a reminder not to underestimate the blitzkrieg dominance of bourgeois ideology in contemporary society. The tragic truth is that decadent bourgeois values are still considered sacrosanct by many. Therefore, a communist critique of this philosophy would be seen as a disgusting aberration, a nuisance. It is one reason why anti-communist hysteria has persisted in the 21st century.
The non-stop propaganda against communism has also made it easier to ridicule revolutionaries for their supposed failure to offer a better alternative to the moribund system which they wish to destroy. In the Philippines, Leftists are accused of fanatically clamoring for the terroristic overthrow of the state without proposing a blueprint for reform.

Some of the silliest anti-left memes found online:

These arguments are easy to refute. First, dissent is essential in any democracy, and it remains legitimate even if an alternative is not immediately articulated. Second, dissent is already an alternative to apathy. And third, it is wrong to insist that Filipino Leftists have been remiss in advancing the agenda of new politics. There is a plethora of documents that elucidate the Left’s political vision. These include, among others, the legislative papers of progressive party list groups (for specific reforms addressed to the bureaucracy), primers of people’s organizations (for societal reforms in the context of the national democratic struggle), and the 12-point program of the National Democratic Front.
Those who incessantly rant about the unimaginative and unproductive politics of the Left are probably misinformed, or they could be deliberately obfuscating the radicalness, the newness, the noble politics of the Left. Activists do not become revolutionaries simply by coaxing them to destroy the political order; they learn to be more committed when they are immersed in the mass movement whose vision is to build a new world.

All things considered, it is the NDF program which represents the most comprehensive and substantial agenda for social transformation. Activists remain activists principally because they genuinely believe in the Cause, and the viability of realizing this Cause through the NDF. When activists speak of system change, it’s either they are thinking about the theory of revolution in general terms or they could be referring to the NDF alternative.
The NDF program was drafted in 1973 and it rallied the anti-dictatorship movement to pursue the path of revolution. It is an essential document to understand the enduring credibility of the Philippine revolution. Reading the text in its entirety would help in smashing the stereotype of the Left as a political movement incapable of providing a meaningful contribution to modern political discourse.

“All things considered, it is the NDF program which represents the most comprehensive and substantial agenda for social transformation”

As an alliance of revolutionary groups, the NDF seeks the unity of the Filipino people in establishing a new government. Workers and peasants will form the core of this new leadership and this is understandable because they represent the majority, the general will of the population. But propertied classes are not excluded from the revolution. The rich are important allies of the national liberation movement. The NDF sees the urban petty bourgeoisie (professionals, intellectuals) as a basic force which must be won over. It considers the national bourgeoisie (patriotic big business, capitalist entrepreneurs) as a positive force of the revolution.
In undertaking land reform, the policy of the NDF is to rely mainly on poor peasants, farm workers and poor fisherfolk. It aims to win over the middle peasants, neutralize the rich peasants, and isolate and destroy the power of the despotic landlord class. Again, owning a prawn farm or a rice field does not mean you are already lumped with the Cojuangcos of Tarlac.
Landlords will be directly involved in the economic reconstruction efforts:
“Rich peasants shall be allowed to retain their land. They will, however, have to rely on their own labor power rather than on hired labor. Landlords who do not oppose land reform and cooperate with the people’s democratic government shall be given adequate means of livelihood so their families can have a decent life. Capitalist farm-owners who have supported the revolution shall be allowed to work with the state to raise agricultural production and modernize agriculture.”
As for government employees, they will not lose employment under the new system. The NDF clarifies that “civil service personnel of the overthrown government—except those accused of serious crimes—will be urged to continue manning their posts and serving the public.”
Private schools “will be allowed under a policy of gradual assimilation into the public education sector.” Churches will continue to provide spiritual services in accordance to the doctrine of the separation of the church and state.
Autonomy will be assured for the Bangsa Moro, Cordillera peoples, Lumads and other indigenous peoples.  The NDF recognizes that the right to self-determination includes the right to secede. After the victory of the revolution, the Bangsa Moro will be encouraged to “take the valid and viable option of a genuinely autonomous political rule.”

Entrepreneurship and business innovation will not be curtailed. In fact, “there shall be concessions given to national capitalists and other smaller private owners of the means of production. The NDF acknowledges that a “mixed economy” will exist as long as it does not negate the socialist transformation of the economy.

The rural-urban link will be strengthened so that “agricultural growth will provide the food and raw material requirements of industry, increase the purchasing power of the rural population and thus expand the domestic market for consumer and producer goods.” The NDF believes that urban renewal through urban decongestion is realizable by developing the rural economy and “uplifting the social and cultural life of the population in the countryside.”

A few months ago, a presidential spokesman rejected the NDF proposal to include the program of national industrialization in the peace talks. He said it is already passe and ideological. Maybe he is pretending to be ignorant because the world’s richest nations developed their economies by pursuing the path of industrialization; and they became more protective of their industries after the spread of the global financial crisis in 2008.

So rather than continue the exporting of our precious mineral resources, these materials can be harnessed to build a strong domestic manufacturing base. The proposal of the NDF is to “make heavy industry as the leading factor, agriculture as the base of the economy and light industry as the bridging factor which produces basic consumer goods for the entire people and the producer goods needed by agriculture.”
Will the new government utilize foreign investments and foreign loans to modernize the economy?  Yes, especially if these will “provide the country with the least costly access to needed technology, products and markets.”

Existing foreign investments and assets owned by foreign capitalists will be nationalized. Compensations and exemptions will be negotiated as long as these conform to the national interest. Onerous foreign loans that “overburden and sabotage” the local economy shall be canceled or renegotiated. Foreigners can sleep peacefully because the new government shall respect their rights whether they are temporarily or permanently residing in the Philippines. Naturally, the state will reclaim ownership of foreign military bases and facilities. Foreign troops will be expelled from the country. But who will defend the Philippines in case of an external aggression? The NDF asserts that the people “will play the key role in defending the gains of the revolution.” There will be no more need to maintain a huge army because the people’s “revolutionary consciousness and militance” will guarantee the security of the state.

The people will ratify a new Constitution and they will elect the country’s leaders. Local assemblies from the grassroots level, to municipalities, towns, cities, provinces, and regions shall be conducted regularly. The people’s right “to revolt against an oppressive and tyrannical regime shall be recognized.” A bill of rights will be affirmed. For those who are concerned about the fate of universities, the right to intellectual property and academic freedom shall be guaranteed.
The liberation of women will be prioritized and one way to achieve this is by combating patriarchy even within the revolutionary movement.
Delivery of basic services such as health and education will be a total and continuous effort. Health personnel shall be deployed in the provinces to correct the imbalance between health services in the cities and countryside.

It is promising to note that in the remote areas of the archipelago where red organs of political power exist, some components of the NDF program are being implemented already. If some of the demands are familiar, it is proof of the success of the NDF, however limited, in broadcasting its proposed alternatives. Some will probably argue that most of the issues included in the program can be asserted through peaceful parliamentary engagement. This is actually the continuing challenge of NDF forces to the forces of conservatism and compromise: Render the revolution irrelevant by building a new society where there is genuine independence, democracy, peace, justice, and development that empowers the workers and farmers. If providing social welfare is already common, then why do millions continue to live in abject poverty? Why do an increasing number of Filipinos leave their families in search of better opportunities in other lands? Why is progress equated with the billions amassed by a few tycoons? Why are we still hostaged by elite democracy? The NDF offers a new way of doing things, a new perspective of practicing politics, a new system of organizing our society. Why celebrate piecemeal reforms that will merely prettify the malodorous present when the absolute truths of the comprehensive new are within our fighting grasp? End the history of oppression so that we can hasten the arrival of the future.