Home FEATURES The martyrdom of GOMBURZA needs to be celebrated 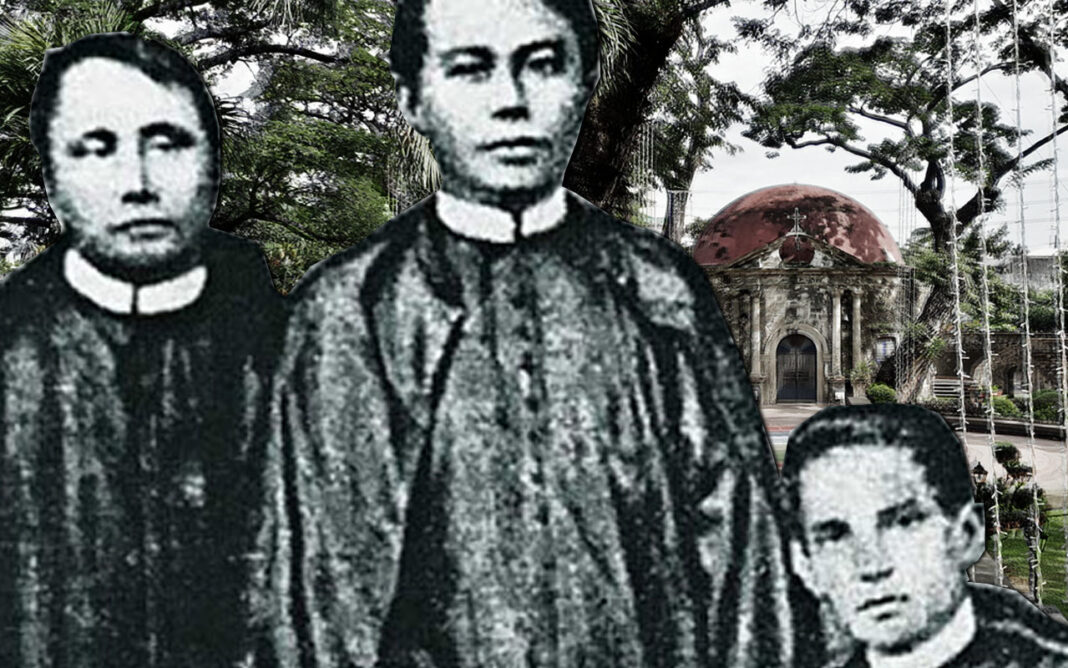 On February 17, 1872, Filipino clergy Fathers Mariano Gomez, Jose Burgos and Jacinto Zamora (also known as GOMBURZA) were executed at Bagumbayan through garrote or strangulation. The Spanish Colonial Government tried them by a court-martial and were sentenced to die. They were convicted of treason and sedition and for “supporting” the Cavite mutiny.

The Cavite munity happened on January 20, 1872, where “about 200 men comprised of soldiers, laborers of the arsenal, and residents of Cavite headed by Sergeant Lamadrid rose in arms and assassinated the commanding officer and Spanish officers in sight.” (Chris Antonette Piedad-Pugay, The Two Faces of the 1872 Cavite Mutiny, posted on September 5, 2012 by National Historical Commission of the Philippines).

The mutiny was suppressed. The other action of the Spanish Colonial Government was the arrest and sentence with life imprisonment and exiled to Marianas Island some “patriots like Joaquin Pardo de Tavera, Antonio Ma. Regidor, Jose and Pio Basa and other abogadillos (which) were suspended by the Audencia (High Court) from the practice of law.” The other action was the dissolution of “the native regiments of artillery and ordered the creation of artillery force to be composed exclusively of the Peninsulares.” (Piedad-Pugay).

GOMBURZA incurred the hatred of Spanish authorities for fighting for equal rights among priest and leading the campaign against the Spanish friars. They fought on the issues about secularization in the Philippines  that lead to the conflict of religious and church seculars

Mariano Gomez is a Catholic priest born in Santa Cruz, Manila. He fought for the rights of his fellow native priest against Spanish abuses. Jose Burgos was born in Vigan, while Jacinto Zamora was born in Pandacan, Manila. All three took up studies in Colegio de San Juan de Letran and the University of Sto. Tomas.

Their execution had a profound effect on many, including the youth, who would go on to form or be part of nationalist movements.

“Without 1872 there would not now be a Plaridel, a Jaena, a Sanciangco, nor would the brave and generous Filipino colonies exist in Europe. Without 1872 Rizal would now be a Jesuit and instead of writing the Noli Me Tangere, would have written the contrary. At the sight of those injustices and cruelties, though still a child, my imagination awoke, and I swore to dedicate myself to avenge one day so many victims. With this idea I have gone on studying, and this can be read in all my works and writings. God will grant me one day to fulfill my promise.”

“The church by refusing to unfrock you, has placed in doubt the crime that has been imputed to you; the State, by enveloping your trial with mystery and uncertainty caused belief in an error committed in fatal moment; and the Philippines, by venerating your memory and calling you martyrs, does not in any way recognize your guilt.”

Jim Richardson explained Emilio Jacinto’s “Gomez, Burgos at Zamora!”, written in April 30, 1896: “The day that Gomez, Burgos and Zamora were executed, writes Jacinto, was a day of degradation and wretchedness. Twenty-four years had since passed, but the excruciating wound inflicted that day on Tagalog hearts had never healed; the bleeding had never been staunched. Though the lives of the three priests had been extinguished that day, their legacy would endure forever. Their compatriots would honor their memory, and would seek to emulate their pursuit of truth and justice. As yet, Jacinto acknowledges, some were not fully ready to embrace those ideals, either because they failed to appreciate the need for solidarity and unity or because their minds were still clouded by the smoke of a mendacious Church. But those who could no longer tolerate oppression were now looking forward to a different way of life, to a splendid new dawn.”

Though the mutiny failed, the murders of GOMBURZA contributed to the awakening of national consciousness. Twenty four (24) years after the Cavite mutiny, the Katipuneros declared a national revolution against the Spanish Colonial Government in August 1896.

In 1998, remains believed to belong to the three priests were discovered at the Paco Park Cemetery by the Manila City Engineers Office.

Now, 148 years after the execution of GOMBURZA, we must look to this inspiration for the nationalist struggles they have inspired.

The martyrdom of Fathers Gomez, Burgos and Zamora is still relevant today. The struggle for religious secularization was already resolved by the Roman Catholic Church. But the struggle for genuine national independence is far from over.

The Iglesia Filipina Independiente (IFI) was founded in 1902, imbued with the struggle for genuine national independence. The IFI’s vision of the Philippines is: “A Philippine nation that asserts its sovereignty and patrimony, where justice and peace reigns and the people pursue active witnessing of God.”

On February 17, 1972, 72 church people organized the Christians for National Liberation to be a revolutionary organization “who had been challenged by social realities and their Christian faith to take part in the new democratic revolution under the leadership of the Communist Party of the Philippines and in accordance with the Program for a People’s Democratic Revolution. They adopted the battle cry, ‘Love your neighbor. Serve the people.’”

Many church people had offered their lives in the altar of a struggle for genuine national independence. Surely, the martyrdom of GOMBURZA is worthy of emulation.