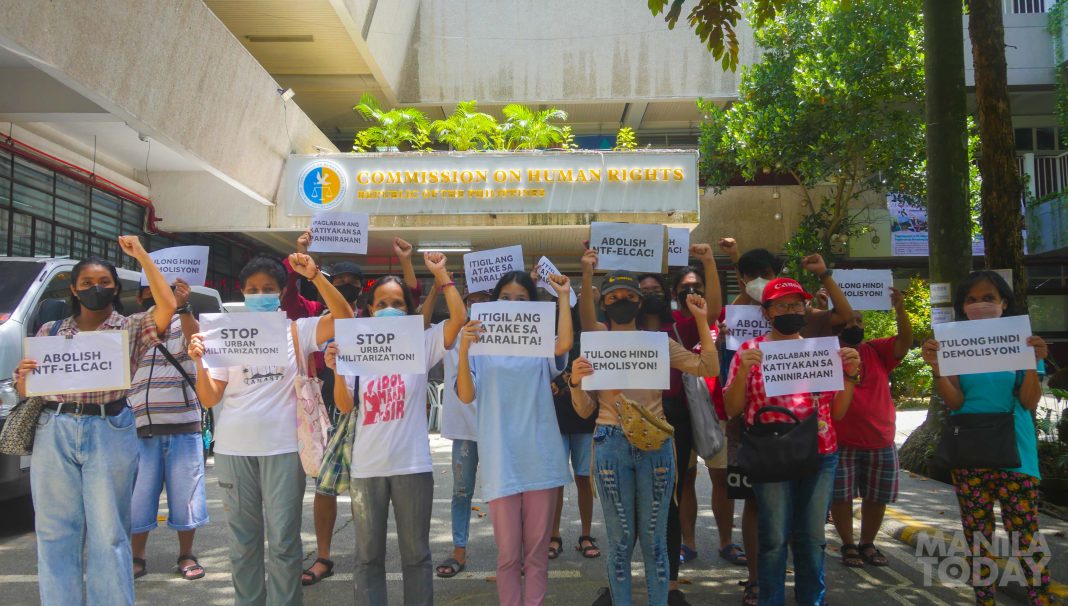 [It is a big question and irony that our demand for housing has been left unanswered. It is very wrong, why the NTF-ELCAC diverted the discussion and not talk about the issue of housing in that meeting]

According to Piano, the task force conducted fake outreach support while it prepared for a series of interrogations among residents who would, later on, be wary of their local urban poor leaders or organizations.

Such a tactic of NTF-ELCAC that residents were prohibited to take photos during the time when red-tagging individuals flashed on a white tarpaulin via a projector transpired. Several residents who at first thought the local government unit brought another wave of ‘ayuda’ or livelihood programs only to find out that these were the actual motives.

Piano noted that NTF-ELCAC actually conspired with the LGU and that even their barangay captain was present and likewise promoted the counter-insurgency campaign of the task force within their area.

Similar to reports of a certain individual bragging about himself as an ex-NPA rebel, Piano denounced the same individual referred to as Danmer De Guzman who would discuss his ‘life story’ and what changes were brought to him when he surrendered to the police forces.

Piano said no one could ever believe in a pretentious, badmouthed enabler of counter-insurgency campaigns to deceive the residents participating in the fight for the right to housing, livelihood programs, just wages, and quality education among others.

[It is only right to fight for our sake, in terms of proper housing especially so that many of our members are only tenants]

Urban militarization in CAMANAVA areas as well as in several communities in NCR has become persistent even before the establishment of NTF-ELCAC. Executive Order 70 of then president Rodrigo Duterte created the said task force mandated to uphold “inclusive and sustainable peace by prioritizing and harmonizing the delivery of basic services and social development packages in conflict-affected areas.”

Accordingly, such inclusivity and sustainable peace that the ELCAC through its operation is seemingly suspicious that many rights groups chided due to malicious profiling and linking of progressive groups or individuals to so-called terrorist affiliations.

Karapatan NCR affirmed that even the delivery of basic social services that many departments or government agencies should be accounted for was tasked to the NTF-ELCAC only to make use of it in such a scheme to access communities they called “conflict-affected areas” to propagate disinformation and red-tagging threats.

[Demolition among communities has been prevalent, as well as the profiling on members of the HOA and other progressive organizations. NTF-ELCAC are carrying out wanton red-tagging and suppression through deception that they sought for resident by giving so-called aid or a seminar but only to spread false information about the progressive organizations they are tagging]

Lucillo stressed that while the marginalized and underprivileged sectors are the ones experiencing the threats to their rights, there are the state forces like the Philippine National Police, Armed Forces of the Philippines, and NTF-ELCAC which enjoyed the billions of funds that in the first place should be allocated to social services for the Filipino people.

As a matter of fact, the Commission on Audit flagged the NTF-ELCAC due to a whopping P33.45 million unliquidated fund disbursements from the Office of the President, who was then supervised by former executive Duterte, since its 2021 audit report.

[The NTF-ELCAC, PNP, AFP serve no other than those in position who are greedy and exploit the poor and the helpless. They are the ones who spread the culture of intimidation and impunity]

Lucillo then sought the rechanneling of the P17.1 billion budget of NTF-ELCAC to livelihood and social services for Filipinos, especially the marginalized sectors across the Philippines.