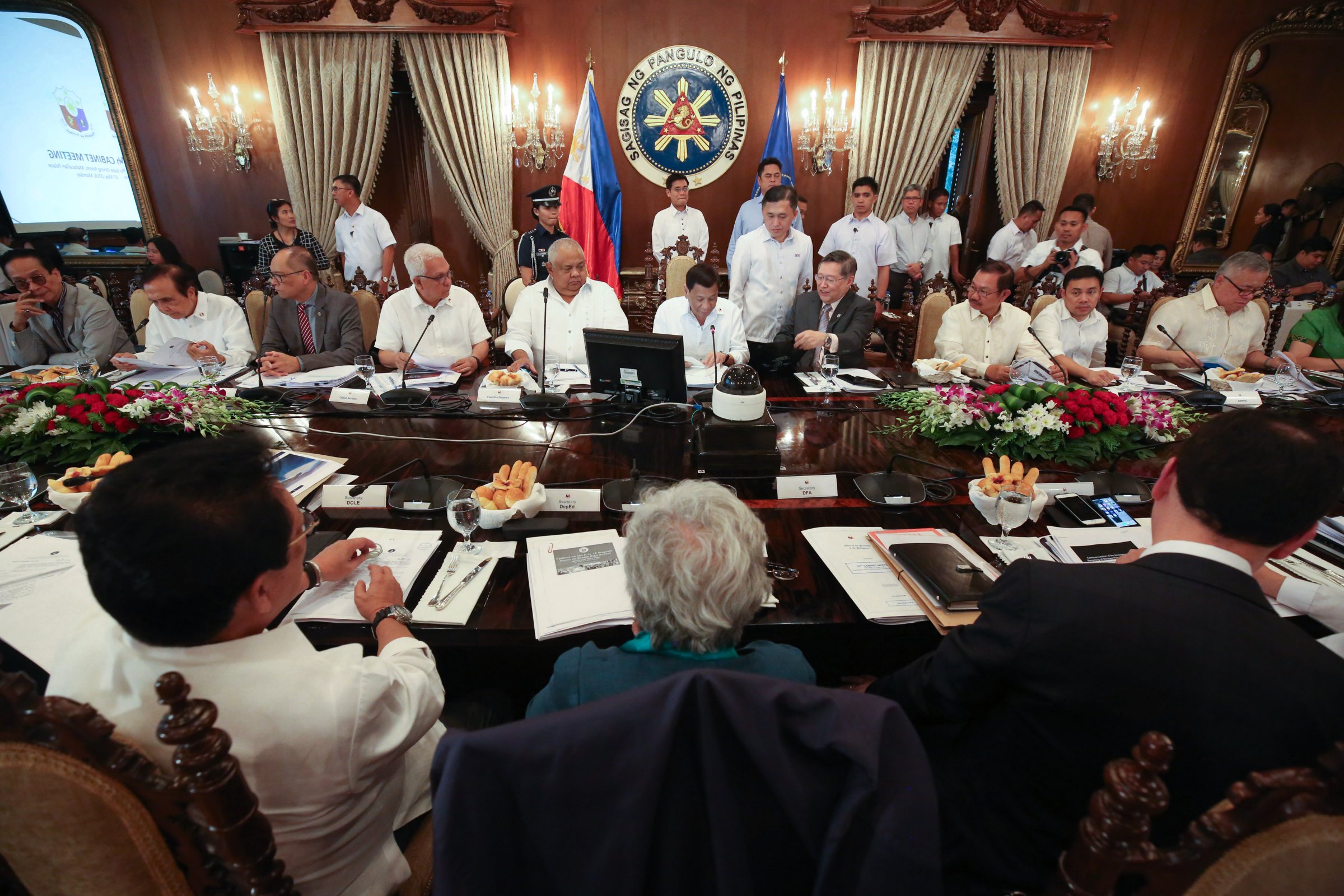 They government representatives so mastered the art of lying and deceiving the people that the most fascinating magic trick in the world pales in comparison; except that the art of our public officials and politicians does not fascinate, it destroys lives. An art so cynical as to treat their subjects as disposable objects; so flagrant as to abuse institutions for their own enrichment. Our politicians are getting fatter and fatter from the catastrophes –which they themselves have wrought– that beset our country.

The Russian founder of collectivist anarchism Michael Bakunin observed that “when it comes to exploitation, [the elites] practice solidarity,” also when it comes to lies and deceits our government representatives seem to me peerless.

The rise of Fake News spreading in social media seems to have originated in Official Lies which our politicians without shame and scruples keep concocting daily. No wonder “the world of politics,” condemned Bakunin, “has always been and continues to be the stage for unlimited rascality and brigandage, brigandage and rascality which, by the way, are held in high esteem.”

Despite the flood of lies that splashes from the sewage of politics and the media, a good part (mostly the middle classes) of our society seems to lapse into silence and apathy.

Ombudsman Conchita Carpio-Morales who stood up against the rising reaction lamented:

What are we to make of the wildfire of lies and deceits of recent events?

How could one miss the melodramatic mendacity of Foreign Secretary Alan Peter Cayetano who, if proven that “we lost a single island during Duterte’s time,” will resign and surrender public office?

Former Foreign Secretary Albert del Rosario confirmed that “the Philippines lost control of Sandy Cay in late 2017 when President Duterte ordered the cessation of construction there due to vehement reaction from China.” The existence of Chinese arms in the said island is not even a secret, Magdalo Representative Gary Alejano seconded:

“It is crystal clear that China is strengthening its militarization of the South China Sea, having deployed an H-6K bomber aircraft after setting up a missiles system just last month. H-6K is a strategic bomber with combat radius of 3,500 km. The range of the bomber practically covers the entire Philippine territory and should definitely cause alarm. I condemn the recent actions of China as this further erodes peace and stability in the region.”

Empirical evidence has so greatly increased of Duterte’s “diplomatic” relations with China which practically surrenders the right of sovereignty of the Philippines over its islands that packing bags renders a more honorable option for Secretary Cayetano.

On cynical robbery in modern times, who could match the talent of Solicitor General Jose Calida (apart from former vice president Jejomar Binay)?

SolGen Calida has been described accurately by imprisoned Senator De Lima, as the “new poster boy [for] corruption” for bagging, through his firm Vigilant Investigative and Security Agency Incorporated, “more than 10 government contracts worth at least P261.39 million” and another additional P110M contract “with the House of Representatives and 2 with the Philippine Amusement and Gaming Corporation.”

But presidential spokesperson Harry Roque sees “no conflict of interest” in the transaction, only the way things are; meaning, thievery and plunder are not subjects of “conflict of interest,” rather they are the foundations of political life in the Philippines. Senator De lima opposed:

“By getting away with millions of pesos in government contracts, Calida is now the role model in government corruption. If we let him get away with it, we are not only normalizing thievery and mainstreaming plunder as a way of life in secret, but out in the open, where enterprising public officials brag about their ill-gotten wealth as the legitimate fruit of being in power, being corrupt, and being shameless about it.”

It is a cause for utter disgust and shame to think of the amount of government money (which is public money) going to the pockets of a family owned business while millions of Filipinos continue to live under conditions of poverty and injustice.

Whose pockets were not holed by the nasty nature of TRAIN (Tax Reform for Acceleration and Inclusion) Law which state economists and the President himself hail as an economic achievement in the country?

Labor groups and grass roots movements have denounced the Law as anti-poor while the research group IBON called on “the administration’s insistence on TRAIN” as sheer “insensitivity to consumers and the working people in its drive for higher revenues. As it is, almost 18 million Filipino families are already hard-pressed to survive on incomes below the family living wage of Php30,000 per month.”

The outrageous claims of Budget Chief Diokno and the big employers that the P750 minimum wage will cause unemployment are but the old, worn out political tactics of the government of shifting the burden to the worker’s shoulders.

A study conducted by IBON showed “that raising minimum wages nationwide to Php750 is doable, need not spike prices further, and will benefit millions of Filipino workers and the economy.” The study continues:

“Raising minimum wages nationwide to Php750 is doable if owners of establishments allow a small portion of their profits to go to their workers instead.”

“Firms and the economy as a whole have more than enough profits to support this.

Data from the 2015 Annual Survey of Philippine Business and Industry (ASPBI) of the Philippine Statistics Authority (PSA) shows that the 34,740 establishments employing 20 or more have Php1.7 trillion in total profits and 4.5 million employees. Raising the average daily basic pay of wage and salary workers from the nationwide average of Php378.71 to Php750 transfers just Php473.2 billion to workers’ pockets, which is only a 28.3% decrease in profits. Workers will meanwhile get to take home an additional Php8,076 per month on average.

“This still falls short of the family living wage and does not necessarily bring everyone up to a decent standard of living but such an increase will provide immediate relief to millions of Filipino workers and their families.”

Who was not dismayed when the Supreme Court granted the quo warranto petition against Chief Justice Maria Lourdes Sereno?

Both the CHR (Commission on Human Rights) and IBP (Integrated Bar of the Philippines) have condemned the act of the Supreme Court as unconstitutional. Opposition Lawmaker Edcel Lagman described the ruling a hara kiri (a brutal Japanese ritual suicide):

“The majority of the Supreme Court committed hara kiri with its bludgeoning the independence of the judiciary and desecrating the sanctity of the Constitution by ousting Chief Justice Maria Lourdes Sereno in an improvident quo warranto proceeding.”

The Supreme Court’s political maneuver against Sereno is an indication of the widespread corruption that has eaten the very institutions that are supposed to uphold the principles of democracy. It only shows that the highest court is now subservient to the whims of the administration and that it is no longer employed to protect the plain legal rights of Filipino citizens. If they can “legally” bludgeon a Chief Justice, what is the fate of a common citizen?

Whose heart was not saddened by the murder of Fr. Mark Ventura, a young Cagayan priest, the persecution of Sr. Patricia Fox, the recent detention of labor activist Juan Alexander Reyes who was illegally arrested by the PNP on trumped-up charges. The labor group Defend Job Philippines stated:

“Reyes has been known to be a champion of workers rights and welfare– for regularization, higher wages, and better working conditions– both in the private and public sector.”

Those voices and groups that confront the monstrosity of impunity, corruption, injustice, and violence in this country are marked politically, they become a ready target for the government’s spurious red-tagging venom (communist, terrorist, rebel, undesirable alien, etc.), while the real perpetrators who hold office are rewarded and held in high esteem.

This year, Assistant Secretary of the Presidential Communications Operations Office (PCOO) Mocha Uson received an award from a prestigious university.

Is it really the case that praises are heaped on the efficacy of the guillotine and laurels are bestowed on executioners and liars?

Indeed, these are terrifying events as we approach the middle of the year 2018. The collective betrayal of political, juridical, financial institutions and the elites is an unmistakable sign of a dying democracy. The destructive lies of those who wield power are limitless and ruthless. To trust these authorities is hopeless.

The only salvation lies in us: in our capacity to unite and resist.

To wage a vigorous fight for social change requires radical solidarity. While those in power practice solidarity in exploitation and lies, our solidarity should be in intelligence, compassion, truth, and love.

This entails a broadly based movement of citizens, students, communities, grassroots movements, labor groups, peasant organizations, and institutions working out common goals. A creative and dynamic alliance of the left that can articulate and tackle the most pressing issues of our time. With the looming economic catastrophe of TRAIN Law, the middle classes are now beginning to suffer what the working classes have been wont to suffer. This should lead us to an acknowledgement of our shared predicament and that our rights and liberties do not come from above but the product of people organizing, people in solidarity, people becoming radical. To be a radical today implies a total distrust in the government and a commitment to clarity and truth. There lies our hope.