Home COLUMNS DEKADA NOBENTA Jurassic World as a Metaphor of Wall Street and the Global Financial... 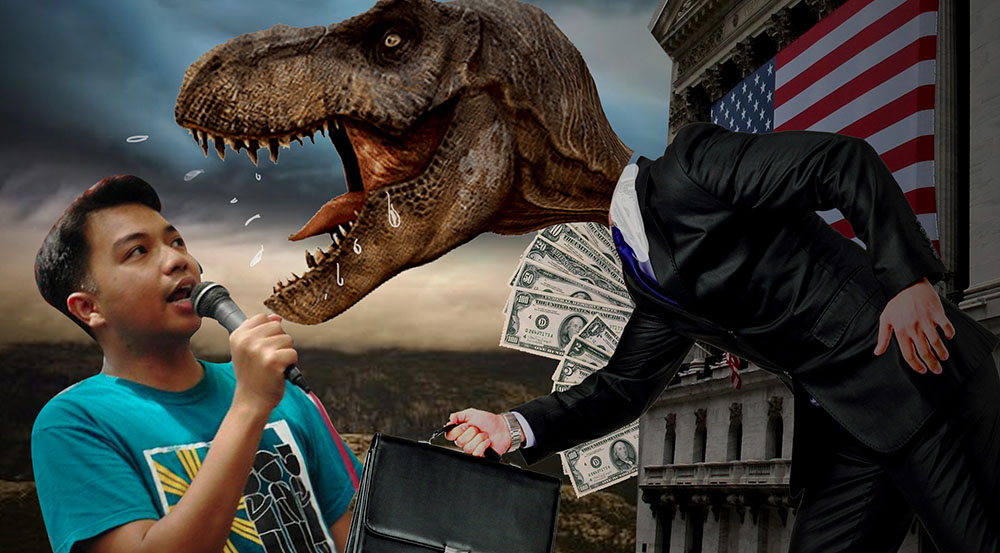 They were bigger, louder, and scarier – not the dinosaurs, but the product placements. Disturbingly, I didn’t feel cheated. Perhaps I have been desensitized already into accepting the incestuous partnership of mass art and the corporate sector. Besides, it’s a Hollywood franchise film which was produced to entertain and generate an insane amount of profit. The moviegoers came to be thrilled and not to learn about science. Based on these standards, the film was rated a huge success.
Without excusing its flaws, the film also has insightful lessons to offer. However, its educational value is not about dinosaurs or tropical islands but its surreal depiction of the modern economic enterprise. What a strange way to appreciate science fiction but if we want more people to understand the monstrous behavior of greedy bankers and financial investors, then the film can prove to be instructive.

WARNING: Text below contain spoilers
The original Jurassic Park ended in tragedy but instead of abandoning the project, it was revived and rebranded by new investors as Jurassic World. Never mind that it’s risky and that it already killed people, the temptation to build a moneymaking theme park seems impossible to resist. It’s irrational but apparently it makes economic sense. It’s actually Wall Street in real life. How many times did it crash? How many lives perished because of speculative trading in the stock markets? Yet Wall Street continues to be the world’s financial center. As long as there’s potential cash to hoard, Wall Street behaves like a recidivist. And every time it self-destructs, the world comes to its rescue.

Jurassic World cloned a new dinosaur species which was named Indominus rex. Its genetic makeup is secret but later we learned that it’s part T-Rex, part Raptor, and they were mixed with several species. What motivated the scientists to play God? They were told to create a new attraction that will excite visitors and drive more interest in the park. They succeeded in breeding a bigger dinosaur which turned out to be an intelligent but deadly albino monster. The Indominus rex is like the complex financial products that overwhelmed the market more than a decade ago. The mad genius bankers at the Wall Street lab concocted new derivatives and hybrids like the subprime mortgages that triggered the 2008 global financial crisis. They thought their risk taking inspired innovation but it only led to more disasters. Like the scientists who didn’t know what animal they created, the bankers were unaware of the exact content of the products they were selling. When it was time to collect real money from the real economy, the Ponzi scheme was finally exposed.

When the Indominus rex got out of containment, there were several opportunities to end its life and thus avoid further fatalities. But security forces were ordered to use non-lethal weapons because the company cannot afford to lose its latest investment. Indominus rex was ‘too big to fail.’ When prestigious Wall Street firms started collapsing, they were also deemed ‘too big to fail’ so instead of allowing them to fall, they received bailout funds. Their irresponsible behavior bloated their real value which allowed them to blackmail the whole economy. They were penalized in a form of reward through the taxpayer-funded cash support.
Indominus rex may be the alpha monster but it was the smaller, flying pterosaurs that caused more damage and mayhem in the main park. The birdlike dinosaurs killed and injured more people than the giant animal. It’s similar to what happens during an economic crisis. When stock markets crash, it’s the ensuing panic and confusion in society that leave more dislocations in many economies. The big crash is fearsome but the numerous aftershocks are more ferocious.

“When stock markets crash, it’s the ensuing panic and confusion in society that leave more dislocations in many economies. The big crash is fearsome but the numerous aftershocks are more ferocious”

When the Jurassic World owner crashed his helicopter in the aviary, was it caused by a dinosaur attack or was it deliberate? It reminded me of bankers falling from skyscrapers during the Great Depression. Did the owner regret his decision to open the park? Before the Indominus rex tragedy, he articulated his vision of building a scientific park that would be embraced by many people and he said that profit is a secondary consideration. He sounded more like a visionary than a tycoon. Was this a caricature of some real life business moguls who wanted to be known as eccentric investors rather than as ruthless monopolists?

The attack of the pterosaurs was like a military air offensive. It’s a demo of what the dinosaurs are capable of unleashing if they are to be deployed for military missions. If we view it this way, Jurassic World suddenly looks like a Disney subsidiary of a corporation which also develops and sells expensive new technologies to the military sector. The park is destroyed but the lab products are stored and transported into a safe place thus ensuring the financial survival of the corporation. Isn’t this an example of how the military-industrial complex continues to operate in the 21st century?
The original superbads in the previous Jurassic Park movies are the uncontrollable carnivorous raptors. But in Jurassic World, they were resurrected as potential allies of the human race. Despite their notorious record, they were expected to side with the humans in the hunt for the Indominus rex. This led to deadly consequences because the raptors eventually helped the beast in killing the humans. Think of raptors in Jurassic World as the neoliberal policy. Laissez faire was discredited in the 1930s but it became dominant again in the 1980s up to the present. Despite its grim legacy of dispossessing the world’s 99 percent, neoliberal prescriptions remain the first option of many governments. When countries suffer from economic downturns, ‘shock and awe’ neoliberal doctrines are used which never solves anything. It even exacerbates the situation. The Indominus rex is part raptor in the same way that the neoliberal cure is directly responsible for causing economic miseries around the world.
Another original super villain is the T-Rex which helped the humans in killing the Indominus rex. It was also given the honor of having the last roar at the end of the film sequence as it asserted its dominance above the park’s mission control tower. It symbolized the triumph of the normal dinosaur species over the genetically modified Indominus rex. T-Rex is like the bailout program and traditional banking regulations which were implemented to rescue the ailing financial sector after 2008. These policies provided some relief but they failed to restore confidence in the financial sector. In fact, the global economy is still in tatters. That is why comparing the T-Rex with the current financial regulations is apt because it is a reminder that we failed to slay the capitalist beast that wreaks havoc all over the world. How long should we allow this monster to control our lives?
Jurassic World is worth the watch because formulaic plot aside, it showed us that despite our glorious scientific achievements, human behavior is still primitive in many ways. Do not fear the dinosaurs that are already extinct, but be cautious every time investment bankers and neoliberal economists are spewing out financial gobbledegook as to why austerity or wage cuts are good for the world’s developing nations.