Home FEATURES Interview on China and the US with Prof. Jose Maria Sison 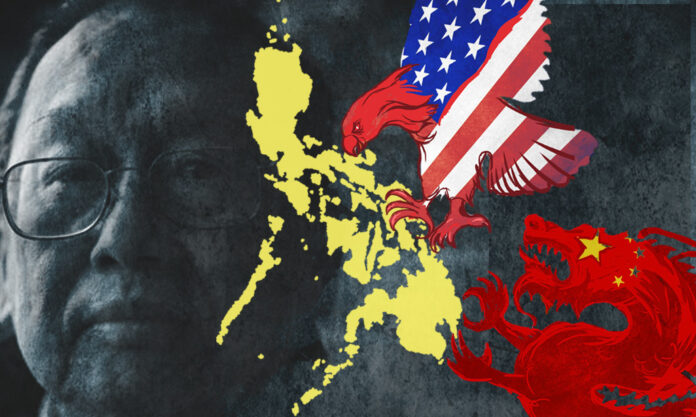 I have some complex questions on the issue of Chinese expansion and the US pivot to East Asia.

1. People are wondering about the stand of the mass movement and the revolutionary movement, as well, as yours on the issue of Chinese aggression in the Kalayaan group of islands and Bajo de Masinloc in the West Philippine Sea. Kindly state your personal analysis on this issue and your personal stand.

JMS: I resolutely and vigorously oppose the aggressive acts of China, especially the occupation of the Bajo de Masinloc and the ongoing reclamations being made in the Kalayaan group of islands. I have published my position in several articles and interviews.

I agree with the revolutionary underground forces and the open legal forces of the national democratic movement that have expressed their position against China’s acts of aggression which seek to grab 100 per cent of the ECS and 80 per cent of the EEZ of the Philippines.

There is a new broad alliance called PINAS which oppose the US and China for violating Philippine national sovereignty and territorial integrity. PINAS will be launched on June 8 and will spearhead the mass actions against the US and China for committing the such violations.

JMS: The US has expressed a neutral position on the maritime dispute between the Philippines and China and speaks only for freedom of navigation in the South China Sea. But it has expressed support for Japan’s invalid claim on Daoyu islands on the basis of previous imperialist aggressions of Japan.

It has its spy satellites always in operation. It has known about China’s reclamations in the West Philippine Sea since the beginning. But it has not made any timely opposition.

It is mainly and essentially interested in making its own violations of Philippine national sovereignty and territorial integrity in collaboration with its Filipino puppets. It allows China’s acts of aggression and yet cites them to further entrench itself in the Phlippines and reestablish US military bases under the Enhanced Defense Cooperation Agreement (EDCA).

3. China’s emerging economic power is the presumed target of the US “pivot” (another English word for rebalance) from the Middle East to East Asia. Kindly state your observations on the rebalance of American military forces on East Asia as a political scientist and an international situation observer

JMS: The US pivot to East Asia or rebalance towards deploying 60 per cent of its naval assets and 50 per cent of itsground and air assets is meant to influence China’s economic, social, political, military and cultural policies and affairs in the direction of favoring a pro-US big bourgeoisie within China and restraining the trend of Sino-Russian collaboration. At the same time,the US is unwittingly pushing China to strengthen its relations with Russia. US is using Japan as a pawn to pressure China.

4.What can the Filipino people do inspite of the Filipino nation’s economic undevelopment/maldevelopment, absence of military modernization for the defense of Philippine waters (lack of planes, ships and missiles), the shameless treason of the Philippine government’s highest officials, and the Chinese expansion, the US pivot to East Asia, and current international events?

JMS: The Filipino people can become more resolute and militant in carrying out the people’s revolution and realize full national sovereignty, the nationalization of the economy, the development of the economy through national industrialization and land reform, boycott against the hostile powers and disable or dismantle their enterprises on Philippine territory.

There are many people already proposing that mass organizations and the people’s army can take offensive actions against the enterprises of hostile powers. They say that they can disable or even dismantle such enterprises, like mines, plantations,logging, power plants, warehouses, real estate businesses, towers, commercial and financial enterprises, and so on.

Many people say that they only need to have a patriotic will, a lighter or match box and cans of petrol to disable or even destroy any unwanted enterprise. They are outraged by China’s reclamations and by the basic condonation of these by the US. They oppose the US and China trying to divide and dominate the Philippines for their respective imperialist benefit.

Because of the ever worsening crisis of the world capitalist system, the contradictions among the imperialist powers will continue to intensify and will result in opportunities for revolutionary advances. The global crisis, depression and the imperialist wars of aggression inflict terrible suffering on the people. Thus, the people are bound to rise up and take their destiny into their own hands. The movements for national liberation, democracy and socialism will resurge to a new and higher level. ###

Sarah De Leon - Feb 25, 2021 0
President Rodrigo Duterte, according to various progressive groups, is of no difference to the late dictator Ferdinand Marcos. As a matter of fact, Duterte...