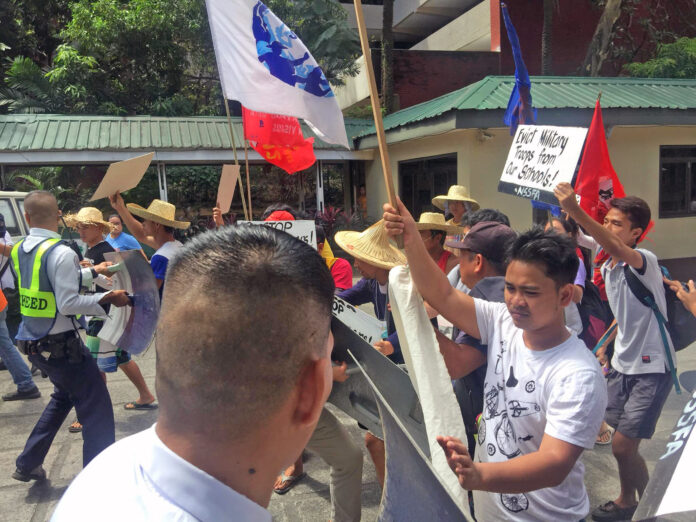 Members of the Northern Samar Small Farmers Association (NSSFA), Alliance of Concerned Teachers (ACT) and children’s welfare group Salinlahi set foot in the Department of Education head office compound in Pasig City to protest the continuing silence and inaction of DepEd Secretary Leonor Briones over the reported military encampment in schools all over the Eastern Visayas.

The protesters marched towards the facade of the agency’s building where they held a program urging Deped officials to face them in a dialogue.

In more than an hour, only DepEd personnel head Frances Dela Cruz faced the farmers and told them that all the officials of the agency were out of town at the moment. Dela Cruz promised to arrange them a meeting with Briones. Eastern Visayas farmers doubt how this would be possible since they would head home on March 8.

Hundreds of elements of the Philippine National Police-Eastern Police District (PNP-EPD) made attempts to disperse protesters but rallyists stood their ground and ended their protest peacefully.

According to the groups, they already sent official communication with the DepEd on February 2018 and received no reply from the agency.

A DepEd staff also vowed to arrange a dialogue with the farmers today during the inter-agency meeting convened by the National Anti-Poverty Commission on March 6.

During the rally, the NSSFA slammed the apparent complicity of Briones on the occupation of troops of the Armed Forces of the Philippines (AFP) inside DepEd schools in their region. The group said the encampment was a clear violation of existing laws.

“Face us Secretary Briones, you must know quite well that your conscience is not clear with your consent of these transgressions committed by AFP troops against our children. Should any of our children be delivered to danger, we, along with the whole nation, will haunt you,” said Allan Aguilando, NSSFA secretary-general.

Aguilando said Briones must not let herself be an accessory to the dismal human rights situation inside elementary and high schools particularly in Las Navas town of Northern Samar.

The NSSFA claimed that some of the violations committed by the AFP include planting of landmines in schools, bombings of school facilities, positioning of artillery and other weapons among others.

They also called on the AFP’s 20th Infantry Battalion “to not use civilians as their shields and immediately pullout its troops from their communities and schools.”

According to the farmers’ group, the most recent incident happened on January 20 when gunshots were heard from the school where the soldiers are encamped. Villagers claimed that while they were taking rest in their respective homes, they heard a loud explosion somewhere near the village’s school and gymnasium where elements of the military were positioning.

Sargie Macallan of Katungod -Northern Samar said, “The incident caused trauma among villagers. Teachers and pupils alike are even afraid of attending class for fear of another gunfight.”

He continued, “Farmers are afraid of going to their fields. Residents resisting militarization are harassed. Surely, military encampment inside the barrio should end.”

Macallan also recalled that series of similar incidents happened in their barrio for more than a year now. According to him, since September last year, soldiers fired gunshots in the air during their village fiesta which brought fear and ruined the festivity.

A separate incident occurred on February 22, 2017 when the military bombed San Miguel National High School that caused panic among school children and personnel who were in the middle of conducting classes.

In a dialogue with the military and some barangay officials last November, they learned that the encampment of soldiers in schools started since July 2017. Soldiers even told barangay officials that they will just be staying there for three days but they remain the schools up to this day.

They also presented the case of a teacher from Taguite Elementary School in Northern Samar who was harassed last October 2017. A member of the 43rd Infantry Battalion of the AFP forcibly opened the door of a school comfort room while the teacher was taking a bath.

“We have said it before and we will say it again: encampment in civilian communities violates Repyblic Act 7610, Comprehensive Agreement on Respect for Human Rights and International Humanitarian Law (CARHRIHL), Geneva Conventions and other international laws and accords.”

Meanwhile, ACT urged Briones to put substance to its policy of protecting children in armed conflict by being instrumental to the pullout of military troops encamped in Samar schools and surrounding communities.

He added, “Secretary Briones must prove that the order issued on November 2016 after a nationwide exposition on the attacks on Lumad schools was not a mere attempt to pacify public outrage, but a sincere commitment to international and national instruments on child protection in situations of armed conflict.”

ACT maintained that schools are spaces for caring and learning and that the AFP has no business and place in the schools.

Valbuena pointed out, “It is expected from the head of the education agency to no less than take a firm stand and confront the armed forces head and demand the immediate pullout of troops in schools and not just set up a reporting system as provided in DepEd Order 57.”

He said that the lives of children and teachers are at stake here, thus, Briones has no choice but to do her duty or be complicit to human rights violations.

“So long as the military is encamped within the community, safety of civilians cannot be guaranteed. We are calling the military to stop using civilians as human shields and do their fighting elsewhere, away from the civilian populace,” Macallan said.