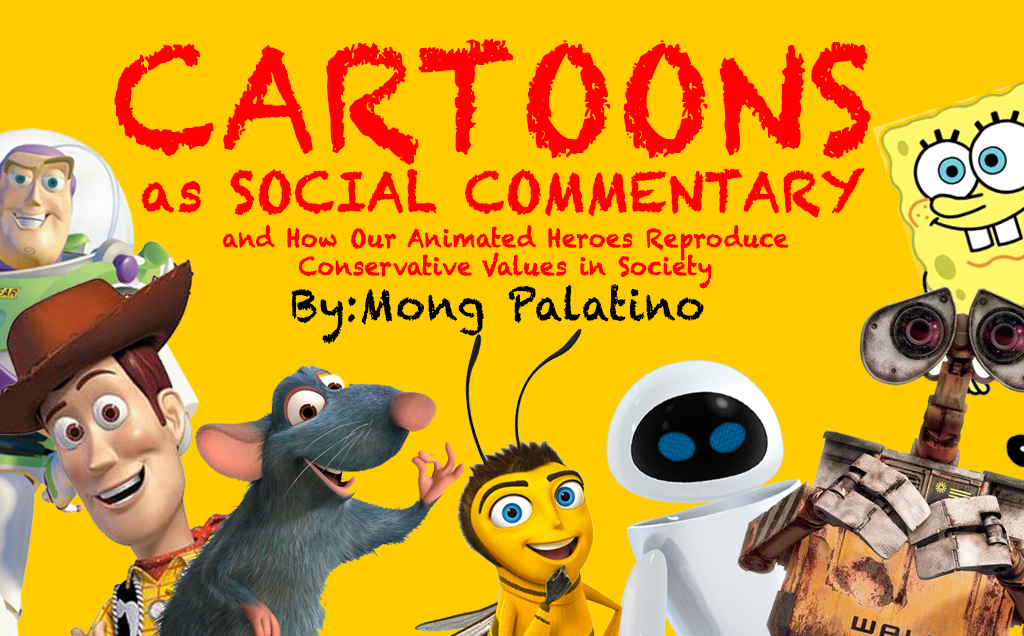 Cartoons do not merely entertain, they also instruct and influence the emotion and thinking of children and adults alike. Even governments sometimes ban cartoons for transmitting messages they deem harmful, subversive, and inappropriate for public viewing. For Filipino kids who grew up in the 1970s, they learned the meaning of Martial Law when President Ferdinand Marcos ordered the removal of Voltes V from primetime TV for containing references to the dictatorship. But what Marcos did was wrong because it was censorship and censorship has no place in a democracy. What we would like to emphasize is that cartoons always convey a particular political point of view. They may be imaginative representations of our world or an alternate universe but they are hardly innocent and value-free. That the good often triumphs over evil in cartoon narratives is not enough reason to bombard our children with cartoon themes. We should be aware of conservative, feudal, and disempowering values that children may absorb from repeated viewing of some cartoons. We should name and repel these meanings, we should challenge the discourse that sustains the unjust status quo, and we should replace them with a more progressive vision of society. Below are some popular cartoons and my attempt to decipher their underreported meanings:

Ratatouille and the Slumrat Millionaire

Either it is a film about a rat that really cooks (anyone can cook, right?) or it is a depiction of migrant life in Europe. The plot mirrors the life story of many migrants: A large happy family living in a distant region is forced by dire circumstances to flee and seek refuge in a rich metropole. But the “undocumented” migrants are unwanted and chased like vermin in the rich city. Fortunately, one of them possessed excellent skills as a cook aside from seriously aiming to assimilate in modern society by suppressing his heritage. After demonstrating that he can cook better than the great chefs of the city, the migrant is rewarded by a sympathetic benefactor. Lesson: Migrants are seen as a burden and they must struggle hard to contribute and give something back to their host community. The complex issues linked to migration are easily resolved in the film not by addressing the great divide in society but by emphasizing that individual talent or merit trumps other concerns. In the end, the family of the great little chef partly succeeds while other rat colonies continue to live in the sewers.

Think of toys as workers and the film becomes a bit creepy. Like Buzz Lightyear, the toy workers initially had high hopes and dreams but they lose their idealism when they learn about the dull reality of their life: Their use value is measured by counting the time they spend with their owners. After this, they could not conceptualize any other goal other than to satisfy their kid master. Thus, they become depressed when they are dumped after years of faithfully performing their duties. The film series is all about satisfying the desperate desire of the toys to be exploited again. They feel nostalgic for the good old days when happy slavery was their everyday routine. The contradiction in the film was solved by finding a new playmate for the relic toys.

The character of the bear rebel and the cause he fought deserve special mention: His righteous rage drew support from other discarded toys and they found a new meaning in life by establishing a mini-commune. However, it’s a utopian playland which degenerated into a toy garrison. How could they think that liberation is possible when the exploitative toy relations remain unchanged? Think again of the rebel toys as utopian socialist workers. How could socialism thrive in a single liberated production unit when the rest of society is still in the throes of capitalist oppression?

Wall-E and the 21st Century Man

Neo-luddites will appreciate the themes explored in this film. Technology is evil, robots seek domination, and man is threatened by the machines he has created. It is a futuristic film that parodies the present. People have become obese, dependent and addicted to their gadgets, and divorced from productive aspects of life. The spectacle society hypnotizes everyone and prevents us from interacting with each other. We think we have free will but our choices are machine-generated. We have become too enamored with our virtual world that we failed to notice the pollution and rapid environmental degradation in the real world. The mass production of so-called wireless technologies has generated an unsustainable amount of e-waste. They have become digital weapons of mass destruction that led to the extinction of many species in the planet. The film ends by offering hope: Man has decided to take back power from the machine and more importantly for the cause of humanity, the post-apocalyptic world is starting to become livable again.

Mr Krabs is the typical greedy capitalist, Plankton is an innovator but unsuccessful entrepreneur, Squidward is an aspiring artist who became a cynical cashier, and Spongebob is the naive and loyal wage earner. Both Plankton and Mr Krabs employ dirty business tricks against each other. Mr Krabs regularly exploits his workers which is resented by Squidward who cannot effectively resist because his co-worker, Spongebob, supports the management. Squidward turns to art to compensate for the alienation he feels at the workplace. Spongebob appears to be satisfied with his life but he is a pitiful and sad character in the story; he is not even a real sea creature. He thinks he got his dream job as a fry cook, he genuinely believes that making krabby patty everyday is the high point of his life, and he is willing to work like a slave with very little pay. Perhaps he gives more value to friends and the time he spends chasing and playing with jellyfishes. Spongebob goes to work hoping that a new day will bring him more happiness even though he will merely repeat what he did the previous day; while Squidward’s detached attitude is perhaps his defensive posture to hide his failures. Their behavior does not change anything: Krabs will continue to amass more wealth while they on the other hand will remain minimum wage workers. It seems there is no alternative to the present other than to endure or enjoy a la Spongebob the fleeting and eternal burden of life.

Bees and the Paradox of Modern Economy

The film is a modern retelling of a poem written by Doctor Bernard Mandeville in 1714 entitled “Fable of the Bees: or, Private Vices, Public Benefits.” Mandeville argued that vices and selfish motives propel the economy forward. Society benefits if individual vices are tolerated. Isn’t Mandeville’s “private vices” similar to Adam Smith’s concept of self-interest? That if each individual is allowed to pursue his self-interest, it will create more wealth in society. But if the vices, corruption, vanity and evil actions in the community are removed, it will lead to economic disaster. Mandeville seemed to have unlocked the philosophical basis of capitalism.

In the film, humans were found guilty of stealing the honey collected by bees. All honey products were then returned to their rightful owners, the bees. The result was chaos. Bees stopped working, honey collectors lost their jobs, and flowers died because bees have stopped pollinating. It seems the only way the system can function is to continue the stealing and exploitation committed by humans. Russian economist A.V. Anikin comments on the irrational logic of modern economy: “What a society in which parasites, warmongers, spendthrifts and rogues bring prosperity, and such unqualified virtues as love of peace, honesty, thrift, and moderation lead to economic disaster!”

Happy viewing! And remember that watching cartoons is always an “adventure time”. Hopefully, it can provide more enlightenment and not just shallow entertainment to our children.